The Steal command is a Final Fantasy classic, a staple of the series, and in Final Fantasy VII Remake it makes a return as its own dedicated piece of command materia. Once you get the ability to steal, that leaves an obvious question: what enemies should you be stealing from?

The vast majority of enemies in FF7 Remake have something that you can steal from them, but in most cases the stealable item is a little mundane: a potion, an antidote, etcetera. Not things worth spending an ATB charge on. A handful of enemies do have more useful items you'll likely want, however, and one enemy is holding on to a major, missable item that you will definitely want. On this page, we detail all of that, from how to get and use the steal materia to the stealables you won't want to miss. Read on...

FF7 Remake Steal guide: how to get the steal materia and use it to get items

To use the Steal command in Final Fantasy VII Remake, you'll first need to get your hands on the Steal materia. As detailed in our guide to the locations of all FF7 Remake Materia, the Steal Materia is available from Chadley, the Shinra researcher you first encounter in Chapter 3. You'll have to complete a bunch of Chadley's 'Battle Intel Report' missions, and mission 7, Magic Elements Pt. 2, will give you access to buy the Steal Materia from him once it's completed. That mission won't be available until Chapter 8, and all you have to do once you get it is exploit the weaknesses of 15 different types/species of enemy, which is easily done.

Once you have the Steal Materia, its use is pretty simple. It's a one-level materia that doesn't level up, and once equipped it adds a single command to your abilities menu: Steal. It costs 1 ATB to use. Stealing items isn't guaranteed, and it appears to be more likely to be successful on enemies that are weakened by having low health or being in a pressured or stagger state. If you don't get the desired item first time, you can simply wait for another ATB charge and then steal again.

How do you know which enemies to steal from? The answer is all in the Assess materia, which reveals the strengths and weaknesses of the enemy. You should be getting into the habit of assessing every enemy anyway to exploit weaknesses like the Battle Intel Mission you need to complete to even get the Steal Materia is training you to do - and alongside the stats of the enemy it also displays their drops and steal items.

You can go back to assess and steal from enemies prior to you obtaining these materia later on through chapter select. But for the completionists, here's the items you really should steal in FF7 Remake... 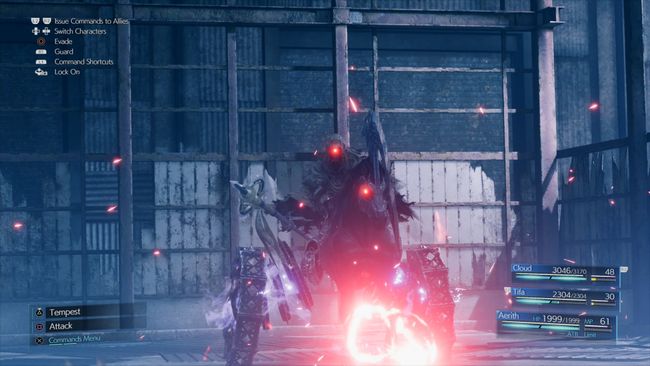 There's only one enemy with a weapon you can steal, and it's practically the reason this page exists. Eligor, the Chariot-riding ghost boss at the end of Chapter 11, has a weapon you can steal. The weapon is Aerith's Bladed Staff, and Steal is the only way you can obtain this weapon in the whole game. If you miss it, you'll have to finish the game and then return to and play through Chapter 11 again in order to fight Eligor again and have another chance to steal it. You'll want this weapon to complete the set and learn all the weapon abilities for a trophy.

Despite being a boss, Eligor isn't too difficult to steal from: just keep using the command until the bladed staff drops. A few times it was stolen first time for us, while other times we had to use Steal five or six times before it dropped. It costs no MP to steal, just an ATB charge, so it's not so bad. If you're on chapter select, you can go in on easy mode to have an easy time of it - once obtained, finish the fight and the staff will still be available in classic, normal and hard.

For more information on what the Bladed Staff is like and its abilities, check out our full FF7 Remake weapons and abilities guide.

While Aerith's Bladed Staff is by far the most useful item to come from the Steal command and the one reason to definitely equip it, there are a bunch of enemies throughout the game that also have armor and some of the best accessories available for you to steal. These items are all very well and good, but keep in mind none are exclusive: all show up elsewhere, and almost all of them are available in shops either at the same time or shortly after you encounter the enemy you can steal them from. Still, if you want to save some gil, stealing is totally an option.

In addition to the above, where more significant items are available, most enemies in the game are carrying something that can be stolen with the Steal command materia. In most cases this is something appropriate for where you're at in the game - a potion early on, a high potion later. An ether, to restore your MP. A few enemies do carry slightly more notable, more powerful curatives like Turbo Ether or Elixir items, however, and a few also carry battle items that can be used to inflict damage or status effects on enemies. Here's a few we've noted, just in case you want to get steal happy on 'em: