A dungeon crawler with some interesting ideas

Need a little help through the dangerous world of Demon Gaze? Here's a few tips to make your trip to Misrid that much more survivable.

Take a look at some of the demons you'll encounter

Lots of information about the battle and character creation systems, along with the Disgaea DLC

Be frightened by shopkeepers in Demon Gaze

Not everyone in this crazy world looks normal. Go figure.

Demon Gaze gets a release date

The dungeon crawler hits the west in April.

NIS America wants you to look it in the eye and, well, I am terrible at puns. 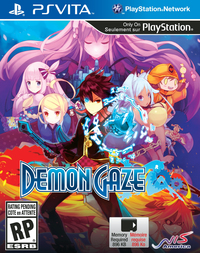