Despite showing its age a bit, Baldur's Gate: Enhanced Edition is still a strong and classic RPG.

Console editions of classic CRPGs are landing in September.

New teaser seems to line up with rumors from late last year.

In this week's podcast, we talk about The Legend of Heroes: Trails of Cold Steel 1 and 2 on PS4, Kingdom Hearts - The Story So Far, Baldur's Gate 3, and more!

A series of tweets cover the story of a potential sequel to the cRPG classic.

D&D Dynamo Sale over at GOG.com knocks 80% off classic CRPG's

Get ten games including all of the Baldur's Gate, Icewind Dale, Neverwinter Nights franchises, the original Planescape: Torment and more for $21.10

Grab a buffed-up version of a classic to take anywhere. 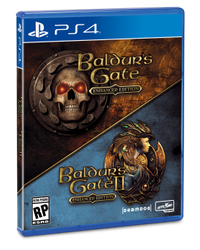