Waiting to get our time with Mass Effect 3 at E3 2011 we were lucky enough to snatch some time with David Silverman, the director of marketing for Bioware and the man behind a lot of what you're going to be seeing in the upcoming promotions for Mass Effect 3.

Silverman is pretty well known to fans of another major gaming series - Command and Conquer. Previously filling a similar role for that series, he pioneered the 'Battlecast' - an online 'TV Show' which treated competitive C&C like a sport. He's now trying to use those credentials with Bioware and has just started up 'Bioware Pulse', another show focused this time on Bioware related news. We grabbed him for a bit to chat about how Mass Effect 3 hopes to evolve the series and send off the trilogy with a bang. 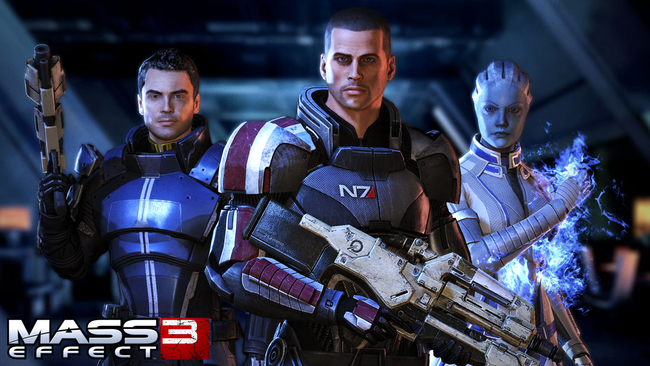 RPGSite: So, first up, major thing - we're coming from an RPG Site. A lot of people were disappointed in the RPG aspects of Mass Effect 2. What are you doing to make the RPG fans happier with this instalment?
David Silverman: So, at Bioware we're constantly listening to the feedback from the fans - looking at what they loved, what they didn't love, looking at the press looking at our own feedback. A lot of people did have the comment that they wanted to see more RPG elements in Mass Effect 3, so we're obviously listening to that.

What we've done is we have an all-new loot system - it's been a complete overhaul - you're gonna be able to find and equip weapon mods for all your different weapons, and we've got this new feature that we're calling the weapon bench.

It means that when you're on a mission, or when you're on the Normandy you can slap a weapon down on the weapon bench and literally customize it to how you see fit. If you wanna be a sniper then you can change the scope - if you have some scopes in your inventory you can upgrade that.

We're also increasing how we upgrade the powers of yourself and your squad mates. So, rather than putting points into one category for each power there's really deep sub-categories with different effects, so you can really choose - it's a really in-depth system for people who want to customize and tailor it unique to their own abilities.

RPGSite: As far as the actual levelling up goes, in Mass Effect 2 you opted for a system where small amounts of experience were rewarded for completing entire missions rather than for individual combat scenarios. Are you sticking with that for this game?
Silverman: So, one of the things we do at the end is we do a final kind of polish and balance to see how everything works. We're definitely focused on those in-depth mechanics that give you a lot of customization and choice in how you interact and customize your characters.

In terms of the unique specifics of how you get experience and whatnot, that's something that we'll finish much later on once we figure out how everything works. We don't want to commit to something now and all of a sudden have it be broken and break the system once the game is complete, so y'know - hold off on that question and we'll get back to it.

RPGSite: This weapon system - the upgrades, mods, that kind of thing - has the idea of loot and buying from stores been fleshed out from ME2, or will upgrades be dished out throughout the story?
Silverman: It's all sorts of things. So, y'know, we've improved the inventory system, the loot system - all those things have been completely redone and taken to the next level. You'll be able to buy upgrades from stores, but some will also be picked up throughout missions, of course.

RPGSite: In terms of the cast of characters, how hard have you had it to try to make everyone fit?
Silverman: So, Mass Effect 3 is the beginning of the Galactic War. At that point, it's a great entry point for people who are new to the franchise to jump right in - we feel this is the best game we've made and the best place for you to jump in and experience Mass Effect if you've never played a previous game.

We've decided that, y'know, because it's such an amazing story and we really wanna engage people in a very emotional experience which maybe they didn't get as much before - we want to take it to an all new experience emotionally - we decided that having a bunch of followers and doing a little bit of story for a bunch of them isn't as impactful and emotional and you don't connect as much than if you have a smaller group of people you can really go deeper with.

So a lot of people who - if you've got fans with favourite characters out there from the previous games, you're gonna be able to see them - they'll make cameo appearances here and there, you may play a mission with them here and there. Depending on the choices you made previously, that'll obviously impact your game in Mass Effect 3, but again - for people who've never played Mass Effect before, we honestly believe that Mass Effect 3 is the best game to jump in on.

RPGSite: You've been fairly active on Twitter with engaging fans of FemShep - Female Commander Shepard. What's the plan with all that stuff?
Silverman: So it started out as just like - I was sitting in a focus group and I was asking people why they love Mass Effect. I couldn't believe how many people responded saying 'We love FemShep, why don't you do more with FemShep? Put FemShep in stuff!' So we're like alright, let's do it - so we thought we would take it - rather than define who FemShep was, we thought we would let the community choose on Twitter.

We've been asking things like what eye colour do you want, what hair colour, and things like that. As soon as we figure out what she looks like, we'll make her and get her into a trailer.

RPGSite: So, there’s new powers for combat - can you talk a little about those and how you think it changes the series?
Silverman: Yeah - there's tons of new powers and abilities, there's special heavy melee attacks you can do that are different depending on which class you are... if you're Adept you get this really cool adept heavy melee you can launch. We've got the Omni-blade, which is a really cool new ability where instead of just using your Omni-tool to talk to computers this holographic switchblade comes out and you can stab people with it...

There's really a lot of really cool things going on in the combat area - I look at Mass Effect kind of as a cocktail - it’d be one part action and combat, one part choice and consequence and another part epic emotional story. It's really the blend of all three of those things that makes the game truly magnificent.

RPGSite: You had these internal tools built into past games where you could see what choices were being made by people and how they were playing - how has that informed decisions made in the development of ME3?
Silverman: Again, that all goes into the research that we do - we do focus testing where we bring in fans and ask them directly one-on-one, we look at what people post on forums, we look at what the press say in their reviews and then we also, like you say, look at how people play the game. That impacts the design decisions that we've decided to make in Mass Effect 3.

So, if everyone's playing as a Paragon and we didn't have all that many Paragon interrupts, well, maybe we add more of those - that's an example.

RPGSite: One last question - we're dedicated to those really hardcore RPG fans - what do you have to say to that particular fanbase about ME3?
Silverman: Y'know, honestly - we're very humble, Mass Effect has been an amazing success for us - I mean, personally, before I started working at Bioware Mass Effect 1 was my personal favourite Xbox game - it's just such a great series and we couldn't be more happy and humbled by the support and loyalty and love that the fans have.

We really want to make sure that Mass Effect 3 lives up to it and meets all their expectations.