Square Enix has celebrated the upcoming release of Collection of SaGa: Final Fantasy Legend with a new trailer which showcases what you can expect from the game when it hits the Nintendo eShop on December 15.

What you can expect is pretty basic, to be honest: it's three Game Boy titles collected together on the Switch, emulated with various enhancements like high-speed mode, screen magnification, background customization and even the ability to play the game in 'vertical mode' by rotating your Switch to create a more Game Boy like experience. That last mode sounds a little silly, if we're being honest - this is hardly a SHUMP or pinball game.

Anyway, it's a collection of Game Boy games. It is significant, however, as these games kicked off the SaGa series and were some of the best-selling games on the Game Boy platform. They're obviously very old now, having released in 1989, 1990 and 1991.

The release date for the collection was revealed as part of last month's Nintendo Direct Mini Partner Showcase - it arrives in just a few months time with a simultaneous worldwide release. 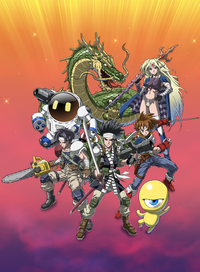