This game was originally planned to have a simultaneous physical and digital releases just like many other games. However, perhaps in light of the global circumstances this year, Level-5 decided to release it digitally first with the physical releases coming later.

The upcoming physical releases will include content added through the post-digital release updates. It will consist of not only the first DLC—which added new characters, story episodes, and a multiplayer mode; it was applied to the Switch version on September 30 and will be included on the digital PS4 launch. It will even include the newly-revealed upcoming second update DLC that will add even more story episodes, as well as multiplayer-focused missions.

Yo-Kai Gakuen Y is currently available digitally on Nintendo Switch in Japan. The digital PlayStation 4 version will be released on October 29 with the first free update DLC included on launch. Despite having a localized title of Y School Heroes announced at TGS 2020, a Western release for this game has still yet to be announced. 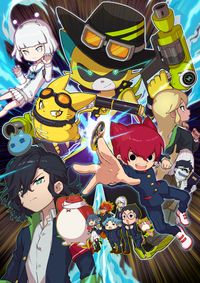