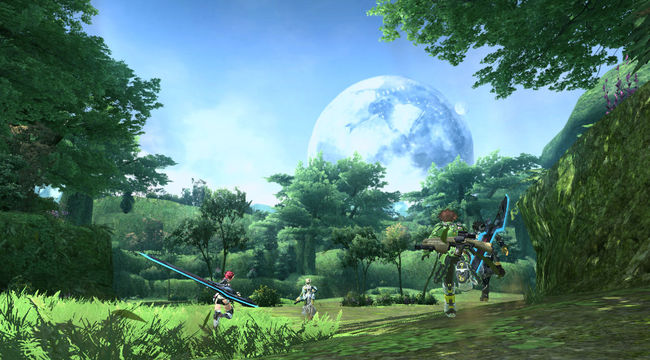 For those that may not remember, at last year's Tokyo Game Show, SEGA showed off a reel of upcoming games that they were working on. One of those just so happened to be a sequel to the first true online RPGs for the consoles when it made its debut on the Dreamcast, the game called Phantasy Star Online 2.

Today, after months of bated breath and barely a word from the company on the current status of its project (we at least know there will be an alpha test this summer in Japan), we have for you today details about the story of PSO2, along with 15 different screeenshots and even a gameplay trailer from today's Phantasy Star Portable 2 Infinity fan appreciation event held in Akihabara in Japan. All of the media does a great job showing off the incredible engine that is going into this game, which may be a modified version of the Hedgehog Engine.

The story is as follows, taken from 4Gamer, which was shown as a series of one-line quotes in the presentation: "The ship fleet Oracle which travels the endless stars. A new adventure that awaits on the countless planets. Invasion of the malice that covers the universe. The name of the people who face off against them is Arcs. Will the universe be saved, or will it be swallowed up? It’s in the hands of you, the hero."

According to the video, there will be randomized dungeons just like in the first game, along with a more combo-focused battle system, a Third-Person Shooter camera and action system, the ability to jump around the environment, the capability to customize your equipment in many different ways, weather transitions, random events that occur during the course of battle, and like the first one, a promise for a neverending adventure.

Phantasy Star series producer Satoshi Sakai and his staff promised on stage at the event that they are trying their best to give players a strong feeling of adventure that they feel has been lost in today's world of RPGs, and the aim is to bring a more mass appeal while making sure hardcore fans and online gamers have plenty to enjoy as they celebrate the 10th anniversary of Phantasy Star Online's release.

I have sunk literally hundreds of hours into this game and it still holds a strong place in my heart to this day. I just hope we still get to use the Spread Needle and Pan Arms. Oh, and a Sega Dreamcast for a MAG! The combat looks way more hectic compared to the first, but still seems to capture the look and feel of the environments in the first, which I loved. Here's to hoping we get more details about a Western release at this year's E3.

Further details will be revealed before the alpha test begins this summer. In the meantime, take a look at the preview video (shot using a camera at the event so we apologize beforehand for the quality) and screenshots below!