The Dungeon of Naheulbeuk: The Amulet of Chaos getting a DLC with Ruins of Limis

Publisher Dear Villagers and developer Artefacts Studio have announced a new DLC offering coming to strategy RPG The Dungeon of Naheulbeuk: The Amulet of Chaos, titled Ruins of Limis. It is set to release on May 25 for the PC version, and will be bundled with the game when it is released for PlayStation 4, Xbox One, and Nintendo Switch on June 24. No pricing details have been given.

A trailer and description for Ruins of Limis can be found below. More information on the game can be found in the original announcement.

Whether it is above or under ground, explore the Dungeon and fight the zombies who invaded it.  Which camp will you choose? The Necromancers? The Vampires?  You’re the only one who can decide. Our favorite heroes are waiting for you to attack the dungeon infested by the living dead! An amazing adventure with many laughs: you will have no time to get bored with them!

Dive into the new zany adventure of the Dungeon of Naheulbeuk with Necromancers and Vampires, lead the least qualified adventurers of the whole Land of Fangh to victory despite their lack of abilities, and make them, through continued efforts and hardships, the most unlikely heroes of all times.

PS: A new Update is also coming today to give you a better gaming experience! If you want more details about this update, please go check the news on The Dungeon of Naheulbeuk Steam page :)

The Dungeon Of Naheulbeuk: The Amulet Of Chaos 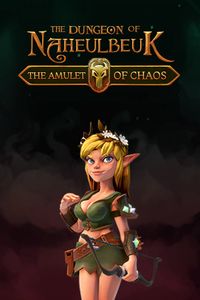 Series
The Dungeon Of Naheulbeuk