Today, Namco Bandai has finally released the English version for Tales of Phantasia on smartphones.

Available today on the Apple appstore and optimized with a touch-screen interface, the game is free-to-play, allowing players to play from start to finish while supplementing their experience with items that can be purhcased for a fee that allows options such as a quick restart after dying in battle. The title also features full Game Center support, including Achievements and Leaderboards.

Interested fans can pick up the title through this link. There has been no word on an Android release.

Tales of the Rays announced for iOS and Android 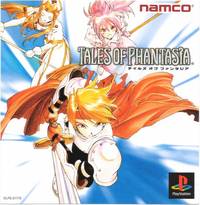