"Darksiders– DS is not dead!!!" Madureira said on Facebook (via AGB) in answer to the cries of some Darksiders series fans, using enough exclamation marks that one simply has to take it as a suggestion of something real being underway. "The new owner, Nordic seems very committed to continuing the series," he continued.

"As far as my involvement, I can’t say at this point. Hopefully we will all have exciting news about the franchise soon!!!!!!"

The first two Darksiders titles were produced at THQ-owned Vigil games. When THQ went under, Vigil did too, but the Darksiders IP was sold in the liquidation auctions, landing with Nordic games. Nordic expressed an interest in continuing the property, but also admitted they had no immediate plans last year. Things may now have changed. Madureira, typically a comics guy, was an outside influence who was instrumental in shaping the game's unique lore and artistic style.

Darksiders was a rather excellent pair of games that told the story of the four horsemen of the apocalypse, envisioned as good-guys in a post-apocalyptic world gone mad. The first game cast you as War and the second as Death, leaving Strife - a gunslinging maniac, and Fury - a femme fatale wielding a whip - unrevealed in all but a few pieces of artwork. Original plans at Vigil for the series envisioned a series of games where you'd play as individual horsemen that would culimnate in a four-player co-operative experience where four players could control each of the group.

We really enjoyed both Darksiders and its sequel, so if there's news of a third title, you'll definitely hear it here on RPG Site. Fingers crossed! 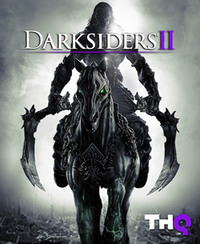