Since revealing the first trailer and details for the game back in February, Square Enix has steadily released new screenshots for Dragon Quest Heroes II, along a long promotion movie (above). We decided to collect all the images released so far, which you can find in the gallery below.

Represented are our main four original characters - Razel, Teresia, Caesar, and Ornace - along with Torneko (DQ4), Maribel (DQ7), and Gabo (DQ7).  Torneko is a versatile fighter that can use a variety of tools to attack up close or from afar, Maribel specializes in magic and long range techniques, while Gabo is an intense physical fighter with the ability to spew flames. 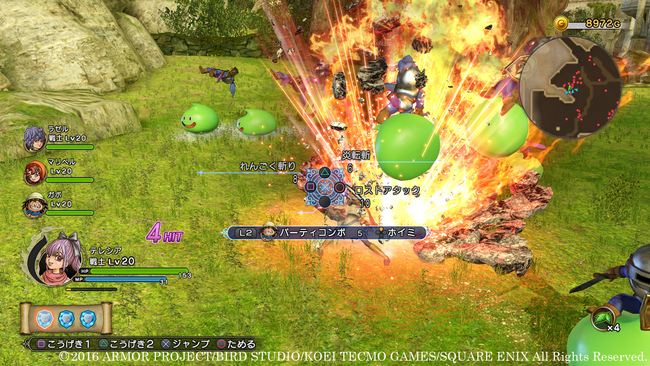 Newly introduced are also Party Combos, where the player can configure abilities that allow combos to continue immediately from one character to the next, allowing for even longer damage chains when taking on hordes of enemies.

Dragon Quest Heroes II is set to launch in Japan on May 27th for PlayStation 4, PlayStation 3, and PS Vita.

Square Enix has released another set of  screenshots. Meena (DQ4) fights using her tarot cards and can capture enemies with them, Carver (DQ6) is a melee combatant with a high level of defense, and Angelo (DQ80 fights from range while supporting his allies with the musical abilities. Additionally, Dragon Quest Heroes II features a quest system, where rewards can be gained by completing tasks offered by the quest office.