The Explorers of Seiren get introduced in the latest Ys VIII: Lacrimosa of Dana trailer

Earlier today, NIS America released a new trailer for Ys VIII: Lacrimosa of Dana. Titled "The Explorers of Seiren", the video introduces four characters in the story - Laxia, Saha, Hummel, and Ricotta - all of whom play an important role in Adol's journey.

Laxia is the daughter of the noble Roswell family from Garman, who was on the Lombardia. She attempts to act like a humble noble, but her inflated sense of pride and stubborn inclinations make it a fruitless effort. In Castaway Village, where all manner of social status and job classes mingle, she feels like a fish out of water, but she decides to utilize her knowledge about ancient organisms and wildlife to assist Adol.

Sahad is a fisherman from Greek who is a dynamic, generous, and cheerful fellow. He is often appalled by his frank and sometimes crude outbursts, but he is warm and sincere—even prone to crying when things get too emotional. He is highly knowledgeable about the sea and has his own philosophy about fishing. He has a family to get home to, which is why he decides to help Adol and escape the Isle of Seiren.

Hummel is an enigmatic “Transporter” who goes rogue on the Isle of Seiren. He takes pride in his work and his serious personality causes him to fulfill any duty that is requested of him. He is also a stickler for cleanliness. He drifted ashore along with a package that he was in the midst of transporting, but keeps mum about both the package and the details of his transportation request. He possesses a new type of weapon called a “gun” that is described as a small-scale cannon.

Ricotta is a girl who was living on the Isle of Seiren before Adol and the others found themselves there. She is innocent to a fault and well-versed in both the island’s geography and the Ancient Species. She gleaned all her other knowledge and vocabulary from documents and books that drifted to the island shore, so her language skills are sometimes lacking. She’s been waiting a long time for her father to return from his exploration of the island.

NISA has also shared details on a Day One edition early adopters will be able to obtain. This version is only available for the PlayStation 4 and will include a 32-page, full-colored art booklet, and a "Select Soundtrack" made up of five tracks.

The PlayStation 4 Day One Edition and PlayStation Vita Standard Edition will feature a reversible cover that will be voted for by the fans. 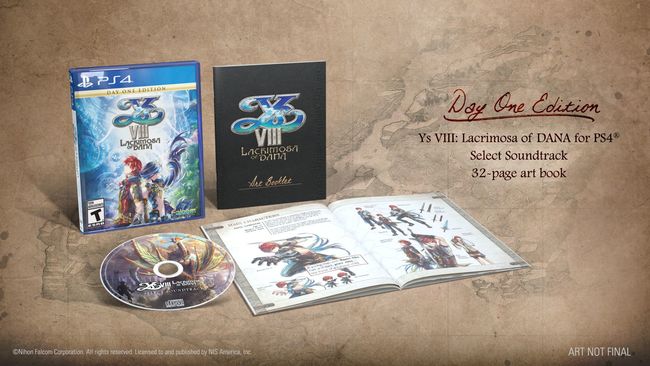 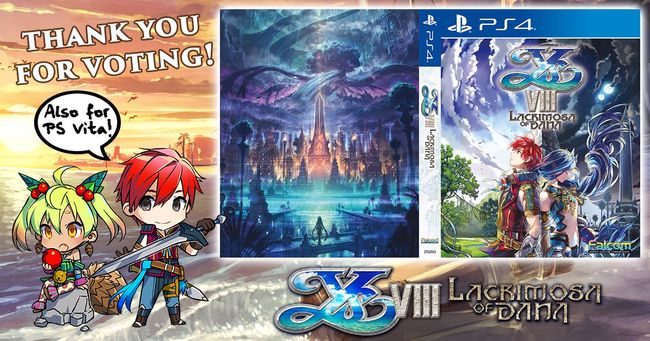 Ys VIII: Lacrimosa of DANA - "Mysteries of the Isle" Trailer