Bond of the Skies for Nintendo 3DS is now out

KEMCO has announced its new fantasy turn-based RPG Bonds of the Skies, which is now out on the Nintendo eShop.

Bonds of the Skies is set in a world where the existence of gods named the Grimoas has become less relevant in everyday life due to the changing of times. The young protagonist Eil is in the middle of his Coming-of-Age ceremony when suddenly his town is attacked by a demon and engulfed in flames. In the midst of this confusion, Eil enters into a pact with the Air Grimoa, Nogard, in order to save everyone.  The game's journey kicks off when Eil and Nogard set off to look for the demon who cast the town into a sea of flames, and to find other Grimoas in order to put a stop to its violence.

Bonds of the Skies screenshots

The game will feature turn-based battles with a formation system which the damage varies depending on the distance. There's a vast variety of skills to master, and you can collect all the Grimoas and unleash special abilities called Synchro Skills.

NeuroVoider is now available for the Nintendo Switch

Bonds of the Skies 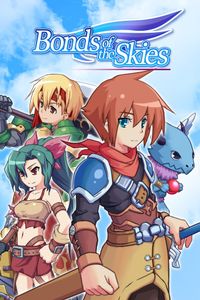