Fallen Legion is finally coming to PC via Steam with both Sins of an Empire and Flames of Rebellion being bundled together as Fallen Legion+. The game is due for release on January 5, 2018.

Fallen Legion+ is an action RPG with flashy combat that reminds me a bit of the older Valkyrie Profile and Tales of games. You'll embark on a personal journey with Princess Cecille and an enigmatic talking grimoire to restore glory to your crumbling home in Sins of an Empire. Flames of Rebellion acts as a complement to the first game's story, where you will travel through a ravaged continent with Legatus Laendur and rally support to take back what the empire took from you.

UPDATE: It has been announced that the game will also arrive to Nintendo Switch, under the title Fallen Legion: Rise to Glory. 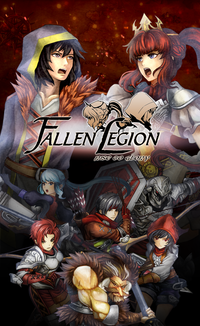