It was announced during the Nindies Summer presentation that The Banner Saga 3 is heading to the Nintendo Switch, with a release date slated for Summer 2018. The final title of the tactical trilogy, Banner Saga 3 will see the conclusion of the plot that began with the first two titles. Of course, savvy gamers might notice a problem with this... without the first two games on the console, Switch owners will have difficulty enjoying the resolution to the trilogy.

Thankfully, developers Stoic understand this dilemma, and will also be releasing the first two Banner Saga titles on the Switch. These two games did not get a release date during the Nindies Showcase, but it's implied that they'll be released ahead of The Banner Saga 3.

For a quick recap, The Banner Saga titles are story driven strategy RPGs that force difficult and lasting decisions on the player. Characters can fall and die permanently in battle, and the choices that are made will have consequences. Everything the player decides on in the original title transfers onto The Banner Saga 2, and these two games' choices and consequences move forward to the third and final game. The most striking feature of the series, though, is the hand-drawn 2D art. 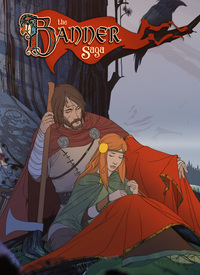