During their SakuraCon panel over the weekend, publisher Sekai Project announced they would be bringing illuCalab's roguelike RPG A Magical High School Girl to the Nintendo Switch. No release date was given, however.

The title was originally released for PC and iOS back in November 2016. Here is a quick rundown of the game from its Steam page (where it currently has a Very Positive rating):

"The magic beckons you."

The only weapon you possess is the magic you conjure from within.
You can freely name your magic. The elemental properties and effects are generated automatically with what you typed in.

Develop the magics you obtain, gain magics from magic stones within the dungeon, and combine to develop even stronger magics.

A high school girl lost in a magical world against a variety of unique monsters with a mysterious coven of witches. Her survival in this cruel yet alluring world all depend on your crafting skills!

Finally, here is the announcement trailer for the Nintendo Switch release: 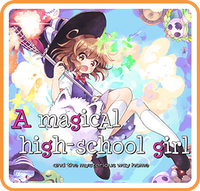