Update: Square Enix Japan has posted a handful of screenshots focusing on these characters, which you can find in the gallery.

H'aanit is a huntress searching for her master, who went missing when searching for a certain fiend. Her path action field skill is Provoke, which uses creatures to draw NPCs into battle. This can be used to open up paths by moving these NPCs out of the way.

Therion is a thief who has been hired to take a valuable gemstone. His path action is Steal, which can be used to pilfer items not found in stores, or to find goods that can be traded for better rewards. 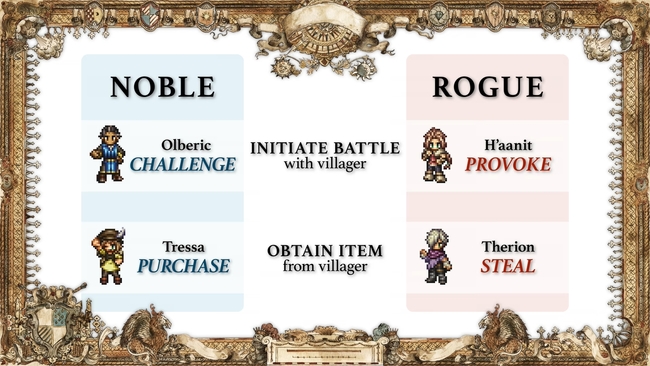 If you been following along for updates to Octopath Traveler, these Path Actions might sound familiar to characters already introduced. Playable characters might have similar actions, such as obtaining items from an NPC, but these actions are divided between Noble and Rogue.

Tressa can purchase items from NPCs, but her ability to do so is limited by how much money the player has. Therion can just steal these items, but there is a chance to fail and harm your Reputation. The player's reputation in the game will have an effect on how the townspeople interact with them.

Finally, the video discusses "Side Stories", which are essentially side quests the player can undertake. Notably though, these quests are said to have multiple possible resolutions, which can be achieved depending on which character's path action you decide to use.

Octopath Traveler is set to release on July 13 for Nintendo Switch. You can find Tressa and Alfyn's introduction here.