Nintendo and The Pokemon Company have revealed a new take on Pokemon with Pokemon Quest, a 'free-to-start' RPG available now on Nintendo Switch. Pokemon Quest will also release for Android and iOS devices at the end of June. You can find the official website here.

Pokemon Quest is free to download and play, but additional in-app purchases can be made. These additional purchases range from $2.99 for individual items, up to $17.99 for the "Ultra Expedition Pack" which offers increased drop rates, EXP, and other bonuses. You can find details on contents and prices of these purchases on Nintendo's website.

Pokemon Quest takes place on Tumblecube Island and features the original Kanto set of Pokemon with a new boxy appearance. Players can set a team of three Pokemon & customize their monsters' characteristics with Power Stones, which offer various effects such as increased attack potency or HP recovery. 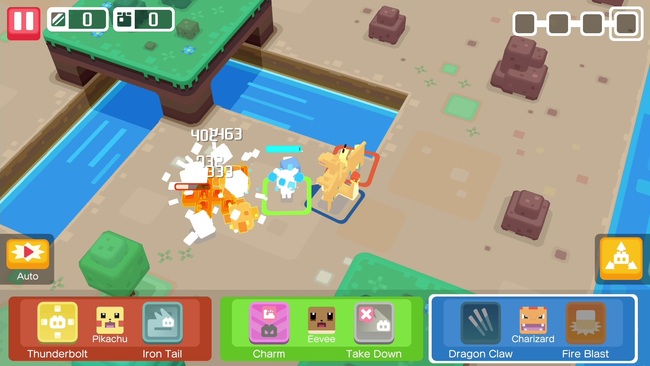 Unlike mainline Pokemon games, Pokemon Quest features a real-time combat system, using a simple tapping mechanic where Pokemon abilities seem to be activated based on skill cooldowns. Loot gathered during your expeditions can be brought back to your home base to cook into new food dishes to attract & befriend more pokemon. The base camp can also be decorated with Pokemon-theme items and furniture.

The publisher also noted that game data cannot be shared between Switch and mobile versions of the game, but no internet connection is required to play once downloaded. If you're already downloading, we're ahead of you, and we've already got some helpful guides including a run-down of cooking and recipes in Pokemon Quest.

You can find an overview of the game and some screenshots below.

Pokémon Quest, a rambunctious action RPG game, was also revealed at the press conference, along with the surprise for fans that it is available today on Nintendo eShop. Developed by GAME FREAK, Pokémon Quest takes players across Tumblecube Island, where everything's a cube — including the Pokémon. Travel the length and breadth of the island hunting for treasure, battling with wild Pokémon, discovering unexplored territories, and even cooking tasty treats to tempt new Pokémon to join your party. Gameplay features of Pokémon Quest include:

Battle by tapping — Pokémon Quest uses simple touch controls that can be enjoyed by everyone.

"This new Pokémon title, developed by GAME FREAK, lets players explore the island of Tumblecube with their team of cute, cube-shaped characters known as Pokéxel," said Shigeru Ohmori, director at GAME FREAK. "Players will be able to personalize their Pokémon and develop a strong bond with their Pokémon friends while battling their way through the adventure. With the simple touch-screen controls, Pokémon Quest is a game that Pokémon fans of all ages can pick up and play."