Square Enix announced that Final Fantasy XV Pocket Edition is now available through the Windows 10 Store, otherwise known as UWP, otherwise known as the Universal Windows Platform. That means players will be able to play the game across their PC, laptops, abs Surface tablets.

For those unfamiliar with the game, here is a full rundown of FFXV Pocket Edition:

The Tale of the Chosen King, Savior to the Star. After years of fighting, the nations of Lucis and Niflheim at last agree to an armistice. As a symbol of this promised peace, Noctis, crown prince of Lucis, is to wed the Lady Lunafreya of Tenebrae. The prince sets forth for his wedding on the eve of the signing ceremony, sent off by his father, King Regis. Unbeknownst to Noctis, however, the journey ahead is fraught with perils...

All ten episodes are available now, with the first episode at no charge and episodes 2 – 10 available for purchase individually or as a bundle. Final Fantasy XV: Pocket Edition is currently available for iOS and Android devices. 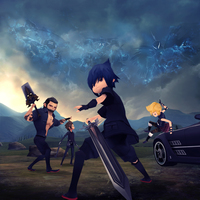