Fallout Shelter premiered following Bethesda's E3 2015 press conference, offering players the ability to manage one of Fallout's eponomous Vault-Tec Vaults and its inhabitants. The game, which eventually found its way to Xbox One and PC following it's initial mobile release - and was downloaded over 120 million times! - is now coming to PlayStation 4 and Nintendo Switch for free.

The game is already available for download on both platforms, and much like the previous releases is free-to-play with optional microtransactions. Particularly with the Nintendo Switch release you can play the game at home or on the go even if you don't own a phone. Fallout Shelter is available for iOS, Android, PC, Xbox One, PlayStation 4, and Nintendo Switch. 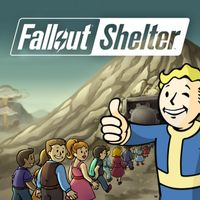