Check out a new trailer below:

One key way players can bond with Eevee or Pikachu is by selecting their hairstyle or by adorning them with hats and accessories. You can also pet them and feed them berries. 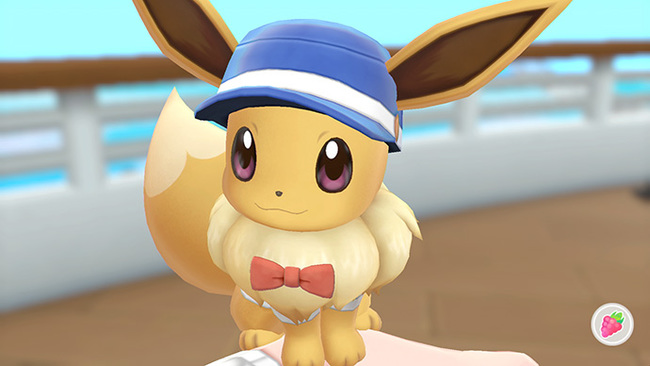 As this is a dense update for the game, we've included the press release in full below. Check out a new set of screenshots in the gallery.

At the start of players’ adventures, they will receive their first partner Pokémon, either Pikachu or Eevee. Unlike regular Pokémon, their first partner Pokémon is not interested in evolving and instead prefers to stay out of its Poké Ball. It will travel with players throughout their journey by hanging on their shoulder or riding on their head. Players can become best friends with their Pikachu or Eevee and can pet, feed and even tickle them. Not only that, but players can dress up their Trainer and partner Pokémon in a wide variety of cool and cute outfits, accessories and even hairstyles to become the perfect style duo with their new best friend.

As players travel throughout the Kanto region, they will meet some familiar faces as well as a few new ones. Professor Oak returns, alongside a new Rival, to present the Pokédex—a high-tech encyclopedia that records data on any new species of Pokémon that players catch in the games. Players will be able to battle Gym leaders across Kanto, including fan favorites Brock, the Gym Leader of Pewter City, and Misty, the Gym Leader of Cerulean City, as they strive to become the Pokémon League champion. In-game Pokémon Trainers aren’t the only ones who can be battled. Players will be able to connect with other players online* or via local wireless communication between Nintendo Switch systems to enjoy intense Pokémon battles. They will also be able to trade Pokémon with each other using these communication features to help complete their Pokédex.

For the first time in a mainline Pokémon game, two people can now play together on one system! By gently shaking a second Joy-Con controller, another player can join the fray. There are some real benefits to adventuring together as well, including making it easier to catch Pokémon and even battling against tough Trainers as a tag team in Pokémon battles. Grab a friend, explore Kanto and experience an adventure like no other.

Pokemon: Let's Go, Pikachu! and Pokemon: Let's Go! Eevee are scheduled to be released worldwide on November 16, 2018. You can find information regarding mythical Pokemon here.