Bandai Namco has announced that Tales of Crestoria is headed westward in 2019. This gacha-style mobile 'Tales of' title was announced for Japan earlier this year, and features original characters and storyline.

While it hasn't been detailed much yet, it seems Tales of Crestoria features a turn-based battle system instead of the series' usual action affair. More information on the game will be revealed during a live stream on December 14.

We've compiled information about the game below, translated by our friend at Gematsu. You can find all their coverage for the game here.

A world where people are required to wear a “Vision Orb” in order to judge those who commit crimes by prayer. Kanata, the only son of a monk who governs a village, has a secret crush on Misera, an orphan girl who lives in the monastery.

On the fated night, Kanata will commit a serious crime in order to save a Misera struck by tragedy. And Misera, too, has a hand in the crime in order to protect Kanata. As a result, Kanata and Misera, who the people wished sanctions upon through the Vision Orb, have become “criminals” on the run from “Enforcers.”

During this time, the two encounter a “criminal demon,” beings hated and feared by the world. His name, Vicious.

“I’ll give you a choice. Will you be swallowed by sin, or will you devour it!?”

In response to Vicious’ question, the two resolve to face themselves and live with the burden of their sin. With the new power of “Bloodsin” at their disposal, they look for a place to rest and begin a new journey alongside Vicious.

Kanata Hjuger: The protagonist, he is the only son of a monk who governs a village. Although he tries to protect the weak and has a strong sense of justice, people keep their distance due to his overly straightforward behavior. He has great interest in the mechanics behind the Vision Orb. He begins to notice the crookedness of the world after becoming a criminal as a result of certain circumstances.

Misera: The heroine. She is an orphan who grew up in the monastery headed by Kanata’s father. She has strong determination in that she never loses sight of her goal, and will take any means necessary if it means saving Kanata. Even though Vicious rescues them and tags along on their journey, she has strong hostility towards criminal demons who will lead Kanata down a dark path.

Vicious: A “criminal demon,” beings hated and feared by the world. With the motto, “live however I want,” he has a carefree personality. In the midst of his journey searching for a certain place, he rescues the now-criminals Kanata and Misera. He has a certain special power that will be of help to them.

Aegis Alver: A flawless and handsome knight, he is the leader of the Midasmegur Kingdom Knights. He has an upright and clean-handed personality that honors justice, and as a result can be thickheaded. He has absolute faith in the Vision Orb, and blocks criminals Kanata and company from moving forward.

Yuna Azetta: A talented journalist and older sister-type. She has a cheerful personality, but tends to lie on the spur of the moment. She chatters on in her unique dialect and thus comes off as careless, but will commit dangerous acts if it is for the pursuit of truth, the principle by which she lives. She cooperates with Vicious as a covert informant.

Orwin Granbery: A worn-out, middle-aged man with a sociable personality. He is never motivated at all and is essentially a useless human begin, so he has no capacity to live. He has a wife named Nina and 10 year-old daughter named Aura, but he mostly lives off his wife’s hard-earned money.

The people of the world are required to wear this. It records the information seen by the wearer and displays the recorded images on Vision Central.

A device that displays the images projected from Vision Orbs. It is located in areas such as the village square and church. Based on the information shared here, the people can use their Vision Orb say a “punishment prayer” (guilty vote).

A group that judges criminals. Humans who have amassed a certain amount of “punishment prayers” (guilty votes), their crime will be acknowledged and a “mark of sin” will be engraved onto a part of their body. If a crime is acknowledged, an Enforcer will soon appear to hand down judgement.

A mark appears on body part of those acknowledged as sinners. A person branded with this mark becomes a “criminal,” who are chased down by Enforcers. The positioning of the mark differs depending on the sin itself.

When a criminal resolves to carry the burden of their sin, and overcomes Vicious’ selection, their Mark of Sin will transform into this new mark.

When a person’s sin is accepted and embedded into their blood, it can take on the form of a weapon. This weapon can be withdrawn using the magic emitted by the Mark of Bloodsin. 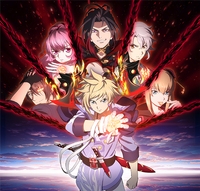