Sega has published a new set of screenshots for Project Sakura Wars, which follows up information from a live stream held last week where Sega showed cutscenes from the prologue, as well as the premiere gameplay footage of the Adventure Mode. Adventure Mode is one of the two modes that comprise the game's flow cycle (the other one being Battle Mode, which will be detailed at a later time).

The story begins when the protagonist Seijuro Kamiyama arrives at the Imperial Theater in Tokyo, having been recruited by the Imperial Revue's general commander Sumire Kanzaki to become the new team leader. As Seijuro interacts with other characters, the LIPS (Live & Interactive Picture System) will kick in where the player can choose Seijuro's response from multiple selections or response intensity using the analog stick within the time limit. You can read the biographies of Sumire and other recently revealed characters in our previous article. 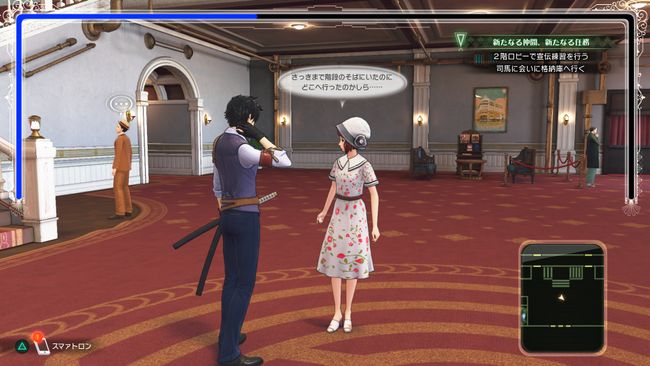 As for new information not discovered at last week's live stream, it is revealed that shiny drops on maps will contain not only bromide portraits of legacy Sakura Wars characters but also clues necessary to progress through the game's story. There are also time-limited events where the player needs to complete tasks, such as collecting information or talking with a certain character within the allotted time, before the blue bar at the above screenshot runs out.

Project Sakura Wars for PlayStation 4 will be released first in Japan as Shin Sakura Taisen in Winter 2019. The Western localization is slated to come later in Spring 2020.