Obsidian Entertainment and Versus Evil announced today that Pillars of Eternity: Complete Edition will release on Nintendo Switch on August 8. As of right now, the release only seems to be listed digitally for the eShop.

The Complete Edition of Pillars of Eternity utilizes a reworked interface to support controller input, and includes all post-release patches and downloadable content including both parts of The White March. It's not been made clear whether the Switch's touchscreen will be supported in any way. Publisher Versus Evil uploaded a new trailer to their Youtube channel. We have it linked below, along with a provided summary.

In Pillars of Eternity: Complete Edition players can build out their chosen character and customize their hero as one of eleven classes across any of the six available races, Human, Aumaua, Dwarf, Elf, Godlike and Orlan. Players can side with various factions using the games reputation system and craft their own story with the allegiances they make along the way, including a party of companions that can join their adventure. This is a realm where choices have far reaching consequences and the chosen path can decide the fate of your party.

With strategic real-time with pause based combat, additional side quests and an epic universe to explore, Pillars of Eternity on Nintendo Switch provides players with the portable opportunity to craft their own compelling RPG with a fantastical world, tactical combat, and an unforgettable storyline that can be taken anywhere they go.

This is a bit of an odd announcement considering that the game's sequel Pillars of Eternity II: Deadfire was announced for Switch, as well as PlayStation 4 and Xbox One, before it even launched for PC last year, only for the console release date to unceremoniously slip to 2019 without a clear launch window. Obsidian has still held firm on a late 2019 console release for the sequel, and at least this way Nintendo fans are able to play both games in release sequence if they wish.

Pillars of Eternity: Complete Edition originally released for PlayStation 4 and Xbox One in August of 2017. You can find our review of the PS4 version here. 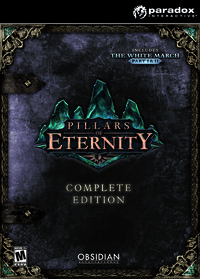