Square Enix has released new information for the remake of Trials of Mana, including the class change system, character prologues, dungeon puzzles, and more. This information comes from the official English and Japanese websites, as well as Japanese publications. Screenshots and some new key artwork can be found in the gallery.

Square Enix also took to PlayStation Blog to discuss a couple of the new character designs for character classes and the thought process in translating the designs from the original SNES version of the game to the remake.

Find the details below via Square Enix. Trials of Mana is set to release on April 24, 2020 for PlayStation 4, Nintendo Switch, and PC. You can find the TGS trailer and character illustrated artworks here. 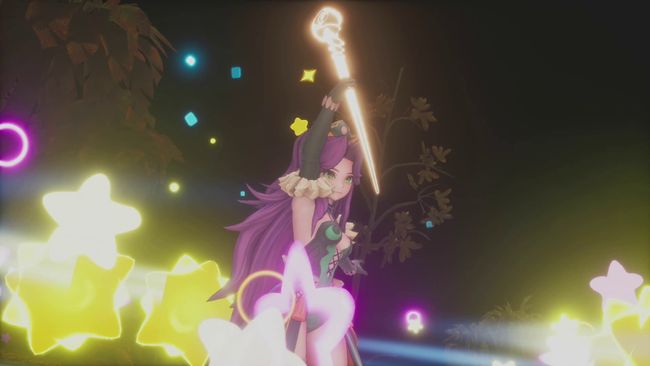 Another way to strengthen your characters besides leveling up is switching classes. New classes allow the characters to learn new class strikes and magic spells. When changing class, you can pick either the “Light” or “Dark” path depending on how you want to develop the character’s abilities.

The Light and Dark classes are proficient in different abilities and attacks. With a Light class, Duran can learn healing magic and equip a shield, making him a balanced fighter. With a Dark class, Duran gains lots of attack power and can be unstoppably strong if properly buffed.

Duran - Young Swordsman from the Kingdom of Valsena

Duran is a proud young soldier from Valsena, Kingdom of the Plains. Though he comes across as hot-headed and ready for a fight, the whole kingdom acknowledges his skill with a blade. Duran has nothing but love for his kingdom and respect for the Hero King, a good friend of his departed father, Loki the Golden Knight.

Angela is the only daughter of the True Queen of Altena, the snow-covered kingdom of magicians. Because Angela's mother hardly spent any time with her as a child, the princess was prone to act out to get attention, wearing gaudy clothes and playing pranks on people in the castle. Despite this, her love for her mother runs deep. Angela never got the hang of casting magic spells, a problem that plagues her to this day.

Kevin - Son of the King of the Ferolian Beastmen

Kevin is heir to the throne of Ferolia. His father is the king of the beastmen, but his missing mother was a human woman. Kevin's father raised him to be a fighting machine, which affected his social skills. He is unused to conversing with humans, which can make him hard to understand at times. The ice around the young boy's heart only began to melt after making friends with Karl the wolf pup.

Charlotte is the granddaughter of Wendel's Priest of Light. She looks much younger than she is thanks to the elfin blood in her veins. Perhaps because of this, she has always been coddled by the people who raised her in the temple. Charlotte's bright and outgoing personality can be both an asset and a hindrance. Though curious, she's superstitious and a bit of a scaredy-cat.

Hawkeye hails from the desert fortress of Nevarl, home to a guild of noble thieves. He was raised as the orphaned ward of Flamekhan, the leader, together with Flamekhan's own children, Eagle and Jessica. Hawkeye comes across as a laid-back and charming young man, making it hard to tell when he's being serious. But at his core, Hawkeye is a fiercely loyal friend. Nothing gets past his honed senses and quick wit.

Riesz is the young princess of the mountainous kingdom of Laurent and captain of the renowned Amazon guard. She has a will of iron and down-to-earth manner. Though some might call her stubborn, Riesz is always there to lend a hand to those who need it. She lost her mother as a child and since then has tried to help raise her little brother Elliot. Her topmost priorities are her father, brother, and kingdom. 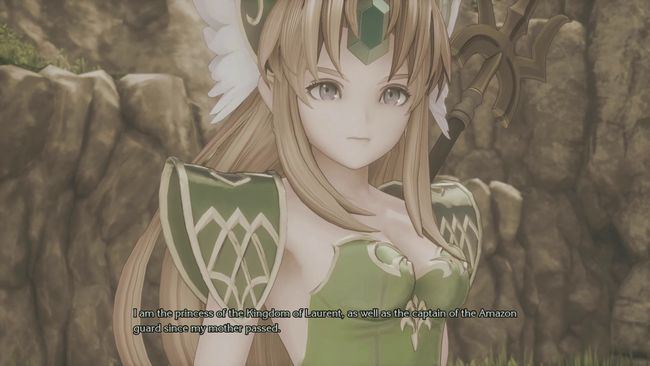 Each of the six playable characters the player can choose from at the start of the game has an opening prologue chapter to their journey, before a customized party of three is chosen. When your primary hero meets one of the other five characters, you can choose to play a flashback for the prologue chapter for them to experience the origin of their own journey. These additional flashbacks can be skipped, and if the player decided to skip them, you can still watch a introduction prologue movie for that character. 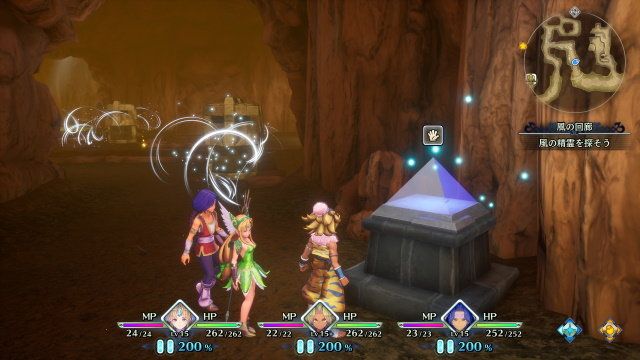 Many of the game's various dungeons feature dangerous traps and puzzles that the party must surpass in order to continue forward. As an example, a certain puzzle will require you to change the direction of blowing wind by activating pedestals. Other hazards, such as erupting lava and flames, will have to be avoided to prevent taking damage. The updated 3D style of the game will make these puzzles and traps easier to manage.

Trials of Mana Screenshots and Artwork