It has been previously known that Azur Lane Crosswave will add IJN Taihou as a DLC character. Today, Compile Heart has revealed more details on this game's post-release support through the Japanese official Twitter account.

With this announcement, Azur Lane Crosswave will eventually add 5 new characters through DLC. Each character will also come with a new story that focuses mainly on them. At the same time, Compile Heart also revealed that the Royal Navy aircraft carrier HMS Formidable is the second out of five DLC characters to be made available for Crosswave. The three remaining characters will be announced later in due time. 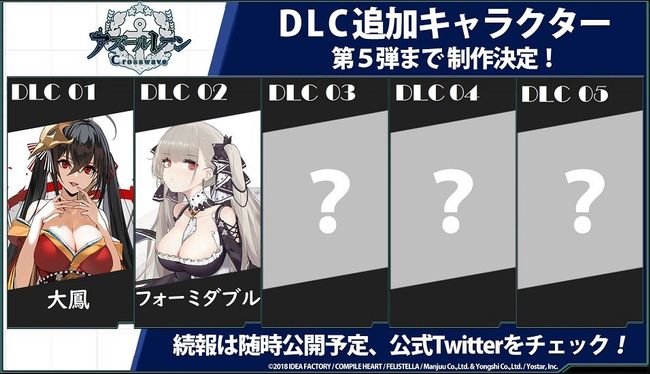 Azur Lane Crosswave was already released in Japan for PlayStation 4 on August 29. Idea Factory International will bring the English localization of this game to the West in 2020, while also adding a worldwide PC Steam release at the same time.

Azur Lane Crosswave to add Taihou as a DLC character