Described as an Action-Adventure RPG by publishers THQ and developers Vigil Games, Darksiders is a game that sometimes feels like it doesn't belong on RPGSite.

Like Bioshock, it's a Western-developed game with RPG elements that give it a distinct RPG flavor but core gameplay that is most definitely a far cry from what most call the RPG genre.

Despite that, I'm glad that I'm sitting down to write this RPGSite review for Darksiders, as after many hours with the game it's clear that it's a very good game that draws some heavy influences from the RPG genre.

While Vigil's idea of what an RPG is might come in the form of upgrading weapons and moves and equipping things in menus, the overall feel of this game has a lot in common with some of the strongest Western RPGs out there, and would serve as a perfect introduction to the Action genre for an RPG fan too daunted by the stylistic choices of God of War, as Bioshock did for shooters.

In terms of how it plays, Darksiders is something like God of War meets The Legend of Zelda with a sprinkling of RPG-inspired upgrades to sweeten the deal. You'll be building moves and combos in gory combat like God of War one minute, and solving Zelda-style puzzles in dungeons the next.

It's a nice combination, as one of the most disappointing aspects of the 3D Zelda titles has always been the combat, and for me the worst aspect of God of War is that there's little to it than ripping dudes apart.

Here's Darksiders, then, offering the best of both worlds while also tickling that RPG upgrade itch I have.

The combat is simple enough at a base level - you've a primary and a secondary attack, a jump button and a block button. Mixing attacks and various button combinations together will provide cool-looking and satisfying combos, and additional moves are unlocked as you progress through the game.

There are also a few magical powers known in this game as Wrath. You can equip a few at a time and activate them by holding one of the shoulder buttons and a face button at the same time - and they're all fully upgradable.

Some enemies can be dispatched with your regular attacks, while others will be ready for a finishing move after a certain amount of damage. Like God of War, a button prompt will pop up, and hitting that button will activate a rather brutal killing animation with some nice cinematic angles - it's a nice touch, though you'll sadly see the same animation for the same enemy types repeated over and over.

Despite that small issue, it's a nice reward for taking down some of the harder enemies in the game and bosses have some fantastic, unique, brutal animations when they're finally defeated.

Despite being inspired by them, the combat in Darksiders isn't as complex or difficult as God of War or Devil May Cry - in fact, the game gives off a sense that it might be aimed at people who wouldn't usually play this type of game.

Because of that any experienced gamer will find themselves tearing through most combat scenarios relatively easy, and the slower pace of the combat means reflexes are far less important than in other games of this kind. You'll find yourself effortlessly switching between Wrath and your various weapon types - and the silky smooth animation means it always looks cool as hell.

The other side of the Darksiders coin comes in exploration, dungeons and puzzles. There's a distinctly Link-shaped silhouette in this gameplay, and you'll find yourself climbing, jumping, slashing and thinking your way through various rooms of dungeons to get keys to open doors to eventually get an item which will then be vital to getting through the rest of the dungeon.

The Zelda comparisons are difficult not to make, and the developers admit this. You'll be grabbing naturally-growing bombs from plants and using them to blow holes in walls in the first dungeon - just like Bomb Flowers in Zelda.

War's Crossblade works just like Zelda's Boomerang, and you'll get a chain that will allow you to cross large gaps just like Link's hookshot. Later on you'll even get your trusty steed, a more evil looking horse who undoubtedly owes his status in the game to Epona. There's no bow, but you do get your hands on a massive hand cannon instead.

Ultimately, you'll enter a dungeon and be tasked with getting to the boss chamber via solving puzzles and defeating enemies in combat.

There's really little to say about this gameplay except the fact that it's effective, satisfying and fun. As well as items, there's also chests littered around dungeons with collectables, including Souls, the currency of Darksiders.

Souls are the Darksiders equivalent of cash or experience points. Every enemy you kill will reward you with souls, and there are also chests you can open in dungeons that will give you a large quantity of souls in one go. Extra souls are also rewarded for flourish in combat.

Souls are then used for the RPG-style elements of the game, with in-game menus allowing you to pump your souls into upgrading your weapons, combat moves, armor, and magical attacks as well as to purchase one-use items to recover magical ability or health.

While souls always come thick and fast and you'll always walk out of a dungeon with several thousand, you'll still be forced to make those traditional RPG choices where you'll have to decide what kind of character you want to build.

I always preferred the Scythe, War's slower but more powerful secondary weapon - so I concentrated my efforts on upgrading the scythe to maximum power, leaving my sword at a lower level. I also specialized in magical powers that allowed me to absorb more damage and survive longer rather than offensive attacks - that was the way I played.

The system doesn't boast a gigantic amount of depth, but is good enough to make gathering souls one of the most important things you can do as you play the game. I constantly wanted to unlock more moves, and the only way to do that was by obtaining souls.

You'll also be able to equip bonuses and accessories to War's weapons, giving you bonuses in combat. It's all very RPG-like, and it's a system that does a pretty good job of adding some more depth to the otherwise simplistic, slower combat.

There are a few other weird game modes in Darksiders, including a Starfox-style shooter when you mount a flying beast, turret guns that feel straight out of a third person shooter and the aforementioned horse riding, which is straight out of Zelda. All of them work well enough.

In terms of story, Darksiders has you play as War, one of the Four Horsemen of the Apocalypse who has been betrayed into helping to bring about the apocalypse early - and he's in a ton of trouble for it. He's trying to prove his innocence by walking the shattered shell of planet earth and defeating the angels and demons that now remain.

The storyline is interesting enough and well acted by the likes of Liam O'Brien and Mark Hamill, but there's something about the world of Darksiders that feels strangely sterile. The graphics are nice looking and the art direction is pretty damn good, but there's never anything that takes your breath away or makes you say wow. It's strange.

Perhaps it's because the game is set on the gutted planet earth. The idea of a war amongst demons taking place in the wreckage of humanity is cool, but in reality everything that surrounds you is often rather bland, with a few notable and pretty exceptions.

The world feels underdeveloped and slightly empty, and in part that is because this is guilty of being a real game-like-game. Almost every part of the world is there to inform gameplay, with clear barriers to some areas that you'll later be able to come back and destroy with moves and items from later dungeons and so on - it all makes the world feel a little less real.

Darksiders is brimming with character, but at the same time something about it just isn't quite right. It's still a pretty looking game, though - it's just a shame it's not as magical as it feels it could've been.

Other than issues with the world, Darksiders is a really fun game. The only major issues I had with the actual gameplay came in the form of a difficult camera during some hectic combat situations and the fact that the counter and dash buttons are one and the same - sometimes leading me to dash directly into a devastating attack by accident.

There's also a bit of a delay when opening menus, reminiscent of the worst part of Fable II. The lack of a run and the fact that you don't obtain the horse until late in the game was also annoying - travel early on is painfully slow.

Finally, there's some issues with the framerate and screen tearing, but these can be mostly forgiven as the slower pace of the gameplay means the occasional visual gaffes don't ruin the whole thing.

The story does a good job of making you want to play, but the main reason I felt myself compelled to continue playing Darksiders was down to the gameplay, which I feel strikes a great balance between gory combo fighting and more relaxed dungeon exploration.

Darksiders doesn't do anything new or groundbreaking, but it does a fantastic job of putting together some of the best elements from other games to make something that isn't entirely original but is still incredibly fun to play anyway.

War's adventure is polished, and even though it doesn't achieve everything it set out to do entirely, it's definitely a fantastic, fun game with good looking graphics and silky smooth animation - and it's a great synergy of the values of the RPG and Action genres. 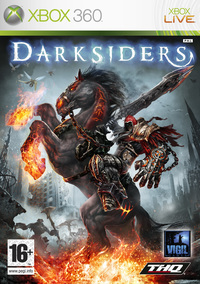