When Dragon Fantasy Book I released on the PS3 and Vita earlier this year, it was an enjoyable treat.  While retro-styled RPGs are becoming more and more common, it managed to stand out with its humor and great style.  Of course, the Dragon Fantasy series was bound to see a sequel, and Book II moved the series into the 16-bit realm, promising more in-depth mechanics and battles than its prequel.  How well does Book II continue the saga? 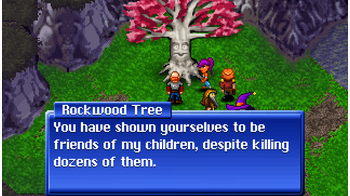 The dialogue still has its bits of humor this time around.
For starters, while you can jump into Book II without playing the first, doing so may leave you a bit confused as to some of the game's plotpoints.  Book II is a direct sequel to Book I, leaving off right where Episode 3 of the original ended.  Ogden and is companions are off in search of the Voidstone of Westeria, and along the way they get wrapped up in a plot that reeks of evil and other unsavory things.

The plot itself is standard, but the characters are what really make the script stand out.  Book II still takes itself seriously for the most part, but Ogden and the other party members will make humorous quips about these ridiculous tropes, right up to the fairly obvious plot twist.  It helps greatly to make an overdone plot feel... well, overdone, and also gives you enough motivation to see the game through to the end. 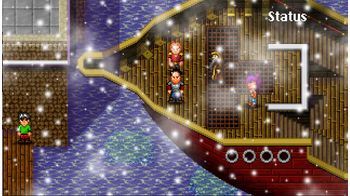 The 16-bit style does Book II good.
The graphical style is also pretty great.  It looks very much like a brother to Chrono Trigger, with large and expressive character models that give you a better feel for them.  Towns and dungeons are also larger and more complex, giving you more to see and do.  Couple that with quest givers and side-dungeons to explore and you have a substantially longer game than Book I.

Of course, longer doesn't always mean better, and it this case the game might be just a little too long.  There is a point early on where your party is split up and the middle of the game is played much like Book I's episodes.  So, in two of the storylines you have to retread old grounds, and for the most part it felt as though most of this story content could have been handled with the party together, instead of being split up.

Part of what makes this middle area feel so slow is with the inclusion of monster units.  To make up for the lack of four party members, you can capture and use monsters to round out your ranks.  While the idea seems sound, most of the monsters have the same skillset and with meager changes to stats.  There's really nothing stopping you from using a new monster you've gotten over an older one, and the overall lack of unique traits make them useless once you get human characters back.  While monster units could have been an interesting addition, it ultimately wasn't implemented well enough to catch monsters beyond the monster capture trophies. 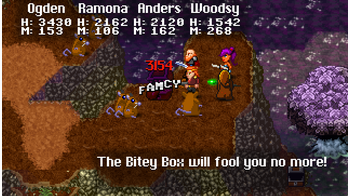 Battles are quick and... sometimes fancy, too.
Thankfully, while the game might feel a little slow in someplaces, battles for the most part do not.  Battles take place on the map this time, which is another nod to Chrono Trigger.  Skills now have ranges and areas of effect, giving an added versitality to elemental spells and unique skills.  Regular battles are typically quick and easy to progress through, and experience is easy to come by so that you'll rarely need to grind.  Minus a couple weird quirks (like having to press the button mulitple times for an action to register, or new enemies suddenly popping into the battle in the middle of a turn), battles go smoothly and AOEs are easy to determine.

Unfortunately, other parts of the game do not run as smoothly, and are issues that could have been resolved with more testing.  There are mulitple grammatical errors, cutscenes that activate out of order (and in one case, reactivated entirely), issues with sidequests, and even game-freezing glitches.  Since Book II's release there have been two patches to resolve some of the more serious issues, but many of the minor, and some of the freezing, bugs still remain, and it becomes a rather big damper on the overall experience. 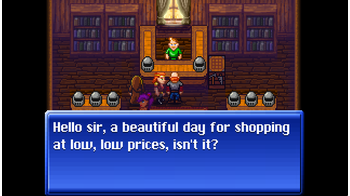 Isn't it always, though?
Dragon Fantasy Book II is an ambitious title, but unfortunately marred by a few too many problems to be as fun as Book I.  It is not a bad game, but the title tends to drag on in the middle, and the tedium with having to deal with inferior monsters and stray bugs are bound to grate on many nerves.  Regardless, if you played Book I and are interested in how the story continues, Book II is still worth picking up at some point... especially if you are interested in what might might happen next in the planned 64-bit Book III.

Dragon Fantasy Book I Coming to the 3DS