Bloodstained: Ritual of the Night Review

A little over four years ago, Koji Igarashi and the development team at Inti Creates launched a Kickstarter campaign seeking to crowdfund a new, modern take on Igarashi’s style of Castlevania. Although older Castlevania titles existed before Igarashi’s involvement, his claim to fame with Castlevania: Symphony of the Night reinvigorated the series by drastically revamping the formulaic linear level structure in most of the older titles with a huge, explorable, gothic-themed environment to seek out abilities to progress along with various RPG subsystems and stats.

Ending its Kickstarter campaign with nearly 65,000 backers and little over $5.5 million dollars, Bloodstained: Ritual of the Night’s long development cycle has had its fair share of bumps as the industry marched forward throughout the years. The Wii U and Vita stretch goals were ultimately dropped in favor of bringing it to the Switch. Numerous delays and the visually rough backer-exclusive beta builds continued to fester worries throughout the once enthusiastic community.

Many still consider Castlevania: Symphony of the Night to still be the absolute peak of “Iga-vanias” and it’s inevitable that Bloodstained has big shoes to fill.

I think Bloodstained: Ritual of the Night largely succeeds at what it’s going for; it’s a decent spiritual successor to Castlevania: Symphony of the Night with some modern bells and whistles. It even has a nice blend of elements from other Iga-vanias like Castlevania: Aria of Sorrow and Castlevania: Curse of Darkness. Bloodstained has a few rough edges mainly due to its Kickstarter roots. Nevertheless, it surpassed my expectations.

There are three critical factors to nail when it comes to an Igarashi-style Castlevania game for me: control, level design, and aesthetic. When one of these pillars falters, the other two have to be that much more solid and sturdy to keep it from falling apart.

In this regard, Bloodstained’s controls are excellent. It feels great to control the game’s heroine, Miriam; responsive, free-flowing, and easy-to-understand. Canceling actions with a backstep and being able to take action immediately again after landing seem like minor things to call out, but tight controls and the quirks surrounding it define what these sorts of games are about - especially ones that specifically try to live up to the Symphony of the Night legacy.

Each type of weapon feels great to control as well. Whether you fancy a whip, a sword, a spear, a giant axe, or even a gun, Bloodstained pretty much allows players to experiment at their leisure until they find something they’re comfortable with. In line with tradition, weapons have a secret move tied to them. These can be learned from journals or simply by trying to find them out; if you discover it, it’ll be logged for you.

Miriam also has a vast arsenal of magic spells at her disposal because every enemy in Bloodstained has a specific shard that Miriam can bind to herself. They can take the form of a simple projectile spell, a familiar, a passive upgrade, and so on. These shards are upgradeable by both obtaining more of the same kind and upgrading them directly with materials. Bloodstained does an amazing job with its tight controls and it really showed as I tweaked my playstyle with different weapon and magic combos throughout the game.

Furthermore, Bloodstained’s level design makes fantastic use of its versatile movement. Early on, players can uncover a hidden move with Miriam’s boots as her weapon that provides large horizontal movement in mid-air. Some optional far-off areas normally meant to be visited later can be accessed quite early thanks to it. This sort of scenario flexes the strength of Bloodstained’s creative architectures. It rewards players just enough for taking the time to invest in it.

Save points and warp points are smartly distributed - often found before bosses and other places-of-interest that should be revisited frequently. I never felt totally helpless or lost as I was wandering around Bloodstained’s castle. There’s a nice loop of filling out the map as much as you can, finding a new traversal ability, recalling the previous areas you’ve seen that can make use of it, and progressing forth.

The scenery never failed to amuse me either. Bloodstained is chock full of environmental variety from the usual medieval castle decor, lush jungle-ish ruins, underwater caverns, and even the classic library of horrors. They all have their own sense of personality separated by the usual transition corridors.

There is a bit of inconsistency in visual fidelity among them nonetheless. Some backgrounds feel barren while others sway too much on the other end. The visual intensity at a lava-filled area, for instance, was a bit much for my eyes after being accustomed to what was shown in the game beforehand. Another place felt oddly jarring as it made use of Bloodstained’s 3D engine to rotate the background as your character traveled on a 2D plane. It’s not a terribly significant issue for the most part, but it sticks out.

Navigating the castle in Bloodstained did give me a sense of nostalgia though. It replicated the sense of discovery I felt when playing older Igavanias so it’s a true testament to the development team and Igarashi himself that it can still be done.

Bloodstained’s aesthetics is where most of my problems lie in this game. Hindsight is 20/20 now that the final product is out, but a lot of Bloodstained’s aesthetic decisions feel off due to its Kickstarter reward tiers. At the higher end of that, backers of certain tiers can have a drawing of them as portraits in the game and even further on, backers could even have their pets modeled as in-game enemies.

I enjoyed a good bit of Bloodstained’s enemy designs, even the cheeky little nod to Shovel Knight, but most of the ones tailored to backers sapped a bit of my enjoyment. It’s a difficult problem to dissect because Igarashi and the development team were just making good on what they promised to the people that paid a lot of money to get those goodies into the game. Yet every single one of those portraits and pet-made-enemy models look terribly out of place. It’s good for a laugh the first time I encountered it, but its prominence throughout Bloodstained makes it hard to completely appreciate the gothic atmosphere it’s trying to build.

This lack of cohesiveness is further brought down by the unevenness of its character models. Put Miriam and Johannes’s models side-by-side as they speak to each other; it’s a disturbing contrast. Other details like Zangetsu’s face and the lackluster clothing fabric rendering on several side characters stick out like sore thumbs. The basic fontwork also hinders the presentation quality.

On the other hand, there are some redeeming qualities in some of Bloodstained’s aesthetic decisions. Customizing Miriam’s color schemes and hairstyle along with accessories showing up on her model gives the game a bit of life in the fashion realm. The hammy high-handed voice acting is rightly accompanied by the familiar Victorian-era type of sound present in Igavania titles.

Bloodstained: Ritual of the Night is a game that gets a lot right, despite being hamstrung by certain crowdfunding decisions early in its lifespan. Its story is nothing really to write home about, though it gets the job done. Most of its bosses feel mundane with only a handful being memorable, especially the optional ones. I played Bloodstained on PC, but many report that the console versions, especially Switch, have their fair share of performance problems.

Despite its numerous shortcomings, I can’t shake the feeling of how much I loved playing Bloodstained. It scratches an itch I didn’t think I necessarily had. It’s fun leveling up, crafting bizarre weapons, upgrading my spells, getting sidequests done, and filling out more of the map bit by bit.

There’s more to come for Bloodstained: Ritual of the Night too. As of the time of this review, it has a New Game Plus, Boss Rush Mode, higher difficulties, and so on. Later on down the line, the developers plan to add local & online multiplayer mode, two other playable characters, a roguelike dungeon mode, and more. I’m excited to see how it all pans out but what I got right now was a pretty cool successor to Castlevania: Symphony of the Night, and that’s alright with me.

Bloodstained: Ritual of the Night 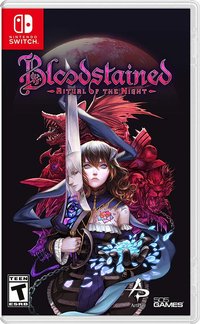