Steins;Gate was a stunning drama that sticks out as one of the finest examples of time travel themed stories ever told. What many writers fail to understand when they approach this kind of topic is how crucial the build-up is. In Steins;Gate’s case, the first half complements its slowly built suspense with moments of comedy, giving you a reason to care about Okabe and the people around him. That way, when the second act kicks off and we see him deal with the consequences of his actions hurting the people close to him, the audience actually cares. The comedy and romance that accompany the tragedy are what make Steins;Gate work so well. So when the Visual Novel ended up becoming a big success, obviously spin-offs were bound to happen.

The first of these was in 2011, the non-canon romantic comedy called Steins;Gate: Hiyoku Renri no Darling. After eight years we’ve finally seen this localized as Steins;Gate: My Darling’s Embrace. I never thought I’d be too interested in playing this game, as I don’t generally care for dating sims, but as I started to dive through the game’s various routes I discovered that it offered me something I didn’t know I even wanted. Darling is not entirely the dating sim it appears to be, but instead a chance for fans to relax with the characters they grew to love within Steins;Gate.

Darling takes place in a peaceful world line slightly off from the original game. Okabe starts the game having seemingly transported to this world line from a D-mail experiment. The lab members still have the Phone Wave (name subject to change), but their main focus is on building new future gadgets to sell to pay off bills. SERN is not a threat, and certain antagonists have completely normal relationships with Okabe. One day Kurisu is developing the lab’s 12th main invention when something goes terribly wrong. Future Gadget Lab 12, called "Darling, You Idiot!", is a device meant to be attached to two lovers in conflict, using two bracelets binding them together until they can get over their issues. Whenever they argue or go too far away from each other, it zaps both people. As you would expect from the setup, naturally the always bickering Okabe and Kurisu find themselves trapped in these bracelets. The quickly run to the Phone Wave and begin to figure out the right D-mail to send to get them out of this situation. Depending on the outcome of this event, Okabe is sent to one of many world lines where he finds himself going through romantic escapades with his fellow lab members.

I’ll say now that it's not a good idea to play this as your first Steins;Gate title. It's not like Phenogram or 0 where it will spoil major plot points of the original, but the reason I say this is because Darling is a game made entirely for fans. There are plenty of neat touches that are meant to be nods to the original game, like Okabe’s phone log containing all his initial D-mail experiments. The whole point of the game is to give these characters a break of sorts, with even the conflicts that pop of in the character routes being more toned down than the original. It recaps things slightly, but it expects you to know who these people are and where they come from.

The route system is probably my favorite aspect of Darling. Like I mentioned before, Okabe and Kurisu prepare a series of D-mails at the end of the prologue. The game isn’t too upfront about when the player can send it outside of a little notifier in the text box, but each time the player doesn’t manually go into the phone and send one of the D-mails this prompts Okabe and Kurisu into writing a new one. Each of these prompts to send a D-mail will send Okabe into one of the character routes, and not choosing anything will keep Okabe on Kurisu’s route. In my own interpretation, this seemed to be the game subtly directing the player down a suggested route order. Darling gives you the option to play these in any order you wish, but it’s a good idea to do this one first and there’s definitely one recommended to be last (which I won’t spoil). I definitely recommend making a save when Okabe and Kurisu get trapped in the bracelets so you can reload it every time you finish one of the routes. From my experience, when you reload the game after Kurisu’s route its a good idea to go in order by the D-mails Kurisu and Okabe type up. The intended last route will be a lot more difficult to reach than just simply sending a D-mail during this part, so players who found it fun to naturally discover the true ending of Steins;Gate will find enjoyment in this.

It's worth noting that all the functionality of Steins;Gate is still intact. Okabe has full access to his cell phone: letting him respond to emails from characters, change his ring tone and wallpaper, and make calls during certain moments. Unfortunately, there are some still some of the text line overflow issues of the console versions of the original game. I’m not sure if the engine just makes this difficult to implement or what, but it does stick out quite a bit. The UI is inspired by the original game’s, but with a slight style change to keep it from looking too derivative. There’s still the fun tip menu that fills players in on terminology both real and fictional as they pop up. Fans of Steins;Gate will feel right at home here.

Kurisu, Moeka, Faris, Suzuha, Lukako, and Mayuri all have unique routes, involving Okabe solving their conflicts and slowly growing closer to all of them. I won’t spoil any of these, but I found them ripe with comedic opportunities and showing a surprisingly level of restraint compared to similar games in the same vein. It’s less about putting Okabe in wacky sexual situations with the girls, and more about Okabe just spending time with the people he cares about. If there’s one criticism to be drawn here, its that I feel that many of the routes set up perfect opportunities for romantic opportunities but don’t really live up to them.

Maybe Okabe is just too shy of a guy, but I felt the payoff for many of these obvious romance setups aren’t explored to the extent I would have liked them too. Just don’t go into this expecting touching kisses taking place on beautiful sunsets. I certainly wanted that between Okabe and Kurisu, but their route was still rather cute all thing’s considered (and I am still very well-fed from the old True Ending). This might have been the reason many people bother playing it, and could be let down for them, but even with this one flaw I still wholeheartedly recommend fans of the original check it out. I find it very fitting with the tone of Steins;Gate, and all these characters feel like natural extensions from how they were originally portrayed. I laughed a ton, and it managed to tug on my heartstrings more than I was expecting.

The presentation is about as good as the original game’s. It reuses many of the Steins;Gate’s portraits, music, and backgrounds (which I found fine since it takes place during the same time frame) but at least there was effort put into Darling. New CGs, music, backgrounds, and sprites were made to fit the new content. They’re all pretty high quality, and it fits well with the old stuff. The voice acting is just as good as the original game, with many of the characters actually feeling more used to their roles than they did before. I find the openings to be a tad too over the top and a bit misleading to the content of the actual game, but knowing MAGES this was likely intentional since all of these kinds of games seem to poke fun at the genre. I played the game primarily on Nintendo Switch and noticed no glitches during my playthrough, but I know that the PC version currently has some issues that need to be fixed like the audio in the intro cutscene not playing. They seem to be in the process of fixing this right now, and I wouldn’t be surprised if it was fixed soon.

Outside of the actual content of the story, I think what pleased me to no end was the translation. I say this with no exaggeration: This is the best translation this series has gotten since the original game. Science Adventure has had it rough since the localization of Steins;Gate. 0 is full of typos, inconsistencies, and mistranslations, Chaos;Child has many of those issues with the addition of a main feature untranslated that is required to complete the game, and while Phenogram read a bit better, it was a bit unpolished after the initial route. Darling reads great, has minimal typos, and is consistent with Steins;Gate’s translation (hurrah for the return of "Hououin Kyouma!"). This is done by the same people who handled Phenogram, but it's apparent that they had much more time on this. They did a great job, and I’d be content if this team were kept on for future Science Adventure titles the upcoming Robotics;Notes Elite and DaSH since Darling shows that with enough time they can do great work.

Steins;Gate My Darling's Embrace is a charming VN that pleasantly surprised me with just how high quality it is. Its nothing groundbreaking, but if you go into it expecting a fun nostalgia trip with your favorite characters it’ll definitely deliver. The comedy made me smile, the translation is high quality, it felt great to revisit the original game with a different spin on the setting, and the characters were as just as enjoyable. Honestly, this is probably my favorite of the spin-off games, it captures the comedic spirit of Steins;Gate and doesn’t take itself too seriously. If you’re a fan, I recommend going through it. If you haven’t played Steins;Gate yet, you should definitely get on that (and then come back). 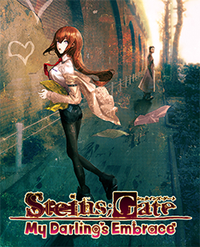