Any role-playing game worth its salt features some equipment of some description, and in Genshin Impact one of your primary pieces of Gear is your load-out of Artifacts. In fact, you might as well basically think of Artifact equipment as your armor slots.

Artifacts are a key part of playing Genshin Impact. Any character has the option of 5 different themed Artifact slots: Flower, Plume, Sands, Goblet and Circlet. Each slot has a sort of speciality, and the five artifacts you equip in these slots are important on a lot of levels, not lease because they are one of the best ways to boost and increase the stats of a character.

Artifacts also slot into 'sets', which can only mean one thing in finest RPG tradition: set bonuses. Bringing togethert multiple artifacts from the same set can maximize the bonuses and gains each offers. Finally, artifacts can level up - and exactly how high they can level up is determined by their rarity, which is rated from one to five stars. Naturally, a rarer artifact is better - and those 5-star artifacts can be very powerful indeed.

If you want more Genshin Impact assistance, be sure to check out our guides on things like the Amenoculus and Geoculus locations, farming and grinding Adventure Rank EXP to level up fast, and Shrine of Depths locations. You might want to also brush up on Elements & Elemental Combos - a lot of these artifacts and set bonuses enhance elements. 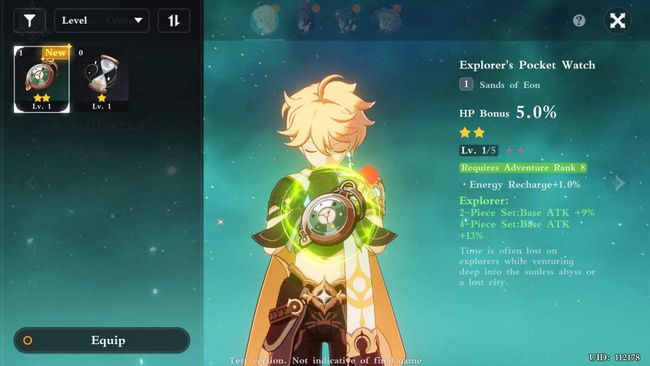 As previously explained, there are five categories of Artifact in Genshin Impact, represented by five symbols: Flower, Plume, Sands, Goblet and Circlet. Each does a slightly different thing, and some are more complex than others. Let us explain.

First, there are the basic 2 stats that can be consistently upgraded with a specific class of artifact:

Then, there are three additional artifacts with a more open-ended structure. They'll begin with one basic stat, but as it levels up and grows these artifacts can evolve to impact more than one type of stat through a sub-stat or simply grow their first initial stat. Below, we list which stats each can have a possibility of buffing.

The slightly weird, slightly complicated manner in which Artifacts are set up in Genshin Impact does have one nice associated bonus: there really isn't such a thing as the out-and-out 'best' artifacts or artifact loadout. Essentially, you and mix-and-match to create something that suits your play style and leans into your strengths and weaknesses - though you should always keep the set bonus in mind, as while not essential it can make a big difference indeed - more on that in a moment.

In the early game and when you're just starting out, we'd recommend going for the Plume of Death feather artifacts and other artifacts that boost the Attack stat as their main benefit in order to give yourself that additional damage output in early battles - then match up a set bonus that suits another area you're keen to have a buff in. As you get deeper into the game, that attack stat becomes much less important, and at that point you'll want to go for a more intricate build.

As with much of the randomly-generated side of Genshin Impact, you can at the very least rely on the ratings system to clue you in to just how good an artifact is on a base level. A 5 star artifact will always be best, and that cascades down to 4 star and 3 star and so on. Anything 4-star or higher is going to be particularly worth your while and worth trying to fit into your build.

In Genshin Impact, an Artifact Set Bonus is when you equip two or more artifacts that are from a specific 'set' - and doing so nets you a bonus. I guess the name makes that pretty clear, but still.