Genshin Impact Daily Reset Time: when the server reset is in your region

Being an entirely-online game, Genshin Impact of course has you connecting to servers when you first log in. It's not quite a fully-fledged MMO, but lots of things are determined by the real-time date and time including certain bonuses and freebies like the daily login bonus and the bonus rewards players get on their birthday. That, thus, raises a question: when is the server daily reset time in Genshin Impact?

The server reset time is important not just because of freebies, but because things like resin, shop inventory and even some quests, like the commission daily quests, are impacted by the in-game calendar, as you can only undertake a certain number of actions like this per day to stop you from blasting through all of Genshin Imapct too quickly.

The truth is, the server reset time will vary depending on the server you join. Genshin Impact has three different servers - North America, Europe and Asia - and each has a different local daily reset time. Here's the times:

For more Genshin Impact help, check out some of our other guides! We've got complete Amenoculus locations and Geoculus locations lists, plus how to find and open all of the Shrine of Depths and the Nameless Treasure chests. If you want a primer on some of the game's systems, check out our Elemental Combos breakdown and Wish system & Gacha rates primer. 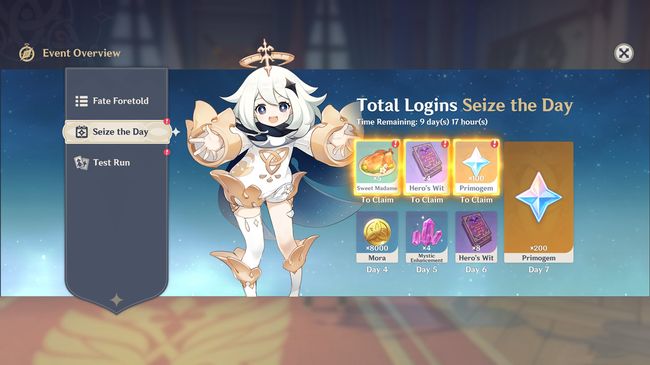 Essentially, the Genshin Impact Daily Reset takes place each day at 4am server time. But exactly when that is will vary.

Exactly what time this is will vary depending on the server, and due to time zone considerations, that means it also isn't necessarily 4am for you locally. It's also worth making clear that that's 4am on a real clock, not on the in-game time.

Each in-game server runs on a different clock, which means each has a different reset time. So you need to pick the server you're playing on, and then see how that server's reset time fits for you. If you're playing on a server in a significantly different location to your physical location, keep in mind that some reset times might be on the previous day - in which instance you'll get mail from the future, dated for tomorrow. The three server reset times are specifically:

The US Genshin Impact server appears to be run from the East Coast, meaning it runs on Eastern Time - that's -5 GMT, if you want to use a central clock. That means the NA server reset times are as follows, depending on where you are:

The European Genshin Impact servers run on Central European Time, meaning their worldwide time is GMT/UTC +1 - one hour ahead of GMT, the UK time and worldwide central time. That means that the EU server reset times are as follows:

Genshin Impact's Asian Servers are set at UTC/GMT +8 - which means the server is likely based in the Phillipines, Malaysia or Singapore, or at least runs on those time zones. These servers are for the worldwide release - China has separate servers of its own. That breaks down as the following reset times around the world:

Once the servers reset, you can then see the replenished shop inventory, undertake more Daily Commissions quests and grab your daily login bonuses.