Genshin Impact Nameless Treasure: where to find these treasures and how to redeem them for big rewards

Genshin Impact is full of loot to grab and items to peruse. One item with some particularly solid rewards is the Nameless Treasure, however - there's a few to find, and if you find these and turn them in to a certain NPC, you can net yourself some big rewards.

There are three Nameless Treasure items to be found around the Liyue region of Genshin Impact's world - and if you trade them in you'll get 100,000 Mora, a bunch of Adventure Rank experience points and even some Primogems which you can put towards your next gacha banner draws.

On this page we'll list the Nameles Treasure Locations, and explain how you can trade in the Nameless treasure to get a reward. If you need more Genshin Impact help, check out our pages on finding the Geovishap Hatchlings to farm Bone Shards, Elements and Elemental Combos, choosing a gift for Lisa in the Troublesome Work quest, plus our Geoculus location list and Anemoculus location list. 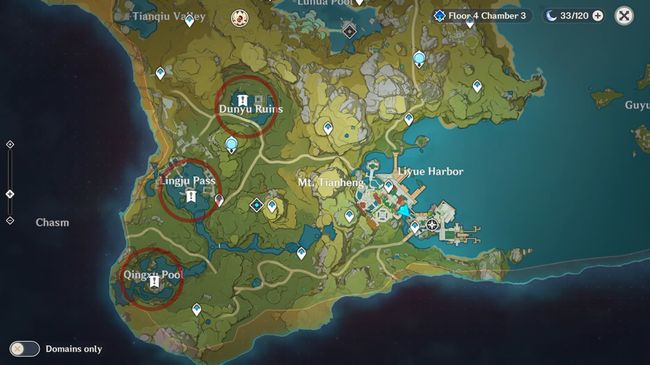 There are three Nameless Treasures total in the Liyue region. They're located in the Dunyu Ruins, the Lingju Pass and the Qingxu Pool - all of which you can see marked relative to Liyue in the map above.

In each instance, the three Nameless Treasures are locked behind a little 'puzzle' of sorts, where you'll need to do something in the area where it's found in order to reach it. We've also embedded a great YouTube video from NotCasuals, which shows the quests for each in a video form, in case that's helpful. Or alternatively, scroll past for our detailed written description.

Now you have the Nameless Treasures, it's time to turn them in for rewards.

How to trade in the Nameless Treasures for Rewards

With the Nameless Treasures in hand, it's time to turn them in. Go to the Liyue Harbor - you're looking for a vendor named Linlang, who runs a store named Xigu Antiques. This is right by the jewelry vendor that you've probably already used. Keep in mind that Linyang and his Antique Store only appears/opens at night - from 9pm onwards. If you can't find him, that's probably why - come back later!