One of Xenoblade Chronicles 2's most engaging features is the process of gathering the various Rare Blades for the party to use in battle. While most of Xenoblade 2's Rare Blades are at the mercy of the game's Core Crystal system, where you have a random chance to obtain them from any Common, Rare, or Legendary Core Crystal, a small handful of them are obtained through quests and similar tasks. Vess is one of the earlier Blades that can be obtained in a non-random manner, so it's a good idea to try to get her at your earliest convenience. As our Xenoblade 2 Blades Guide explains, your blades impact every aspect of your performance, so it's well worth getting Vess early.

Fairly early in the game during one of your visits to Torigoth's market area, you'll find the Rare Blade, Vess standing outside of the Butchers shop. She lets the party know that she was just trying to shop for cooking ingrediants, but what she wants isn't found on the market. This is the first part of the quest Tranquility, which will be a long quest that results in getting Vess on your team.

The first things Vess asks for are 5 Salty Soil, 8 Gromrice, and 5 Ruby Mangosteen.

We've got even more Xenoblade Chronicles 2 guides to help you navigate the more obtuse elements of the game: 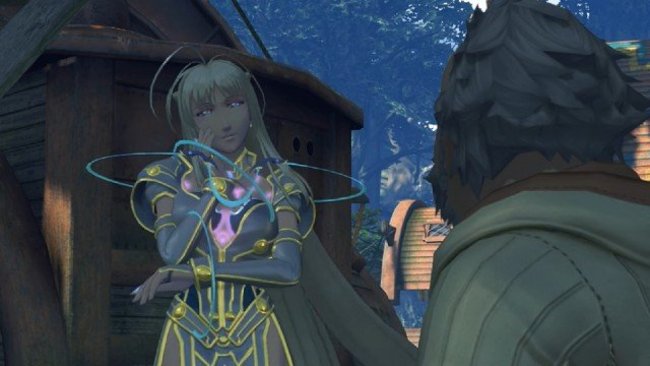 Where to find Gromrice, Salty Soil and Ruby Mangosteen to get Vess

Ruby Mangosteen: This is one of the more common items Vess is asking for, but in case you need a few more, you can Skip Travel to the very early areas of the Uraya titan: Ruby Mangosteens are commonly found around the Greatmaw Rapids and other areas of the Head.

Salty Soil: The second ingredient for Vess can be found at the back part of Uraya in the Olethro Ruins area,

Gromrice: This elusive ingredient can only be found in a few of the farm fields found in front of the entrance to Fonsa Myma, or in the similar looking fields in the west areas of Garfont, just past the various shops, near the shallow water.

Once you have these items, return to Vess at Torigoth to start the next part of the quest,

After doing some very straightforward parts about finding firewood, you'll be tasked to find two more items in this quest to recruit Vess: Bitter Choclit and Fruity Rice Balls.

Bitter Choclit: This one is easy, Shellbrow Wagon, one of the Dessert Shops in Fonsa Myma, will sell Bitter Choclit. The shop is found near the theater.

Fruity Rice Ball: This is found at the Dessert shop in Argentum, Honeycomb Sweets. You will need to do a Merc Mission beforehand to make the item available from the shop's listing.

After your errand run, return back to the Torigoth windmill to start the last phase of the quest - finding the Golden Bracers.

Tracking down the Golden Bracers

Mabon will ask yet another favor of your crew: to track down the pair of Golden Bracers from his service time 30 years ago. One of them can be found in the Fief of Forgetfulness in Mor Ardain, the other at the Ruins of Fountain Park in Uraya. Both of these areas can be tricky to get to, so here's how to find both parts.

Left Golden Bracer at Ruins of Fountain Park: This one is more straightforward, so we will tackle it first. Skip travel to the center of Fonsa Myma, at the Holy Gate of Fontana. From here, take the Great Staircase down, heading back towards the stomach of Uraya. When you get to the breakage in the staircase, simply jump to the next section, and follow the path around to the back side, where you'll find the buried chest.

Right Golden Bracer at the Fief of Forgetfulness: The first thing you'll need to do here is to make sure that the Cloud Sea is set to low tide. To do this, simply go to an Inn and select Long Rest until the tides are shown as below the dotted line in the UI indicator.

After you have the proper conditions, head to the Kedeigh Gate in Alba Cavanich, and start heading north, as if you were going to go into the field of Mor Ardain. Before fully exiting the city though, look to your right and you'll find a staircase leading to a bridge that heads under the city. From this bridge, you can jump off the sides, taking the metal fixtures like giant stairsteps down to the next rocky outcropping. Here, there will be a tunnel heading down to the Fief of Forgetfulness. You'll get stuck here if you didn't make sure you have the tides set to low.

Once finding both Bracers....you're still not done! Mabon will ask that you deliver each to his children, Noelle found in Fonsa Myma near the Art shop, and Antis found in Alba Cavanich, above the Aux Core shop.

Upon returning these items to the windmill at Torigoth, you'll watch one last cutscene and (finally) nab Vess's Core Crystal.