Shadow Of The Colossus Walkthrough & Guide Part 1: How to defeat the First, Second, and Third Colossi

Shadow Of The Colossus is a true classic, and the new PS4 remake of the game does it justice and then some. It can be a tough game, however, and it's easy to get lost or be confused as how to defeat a Colossus. We're here to help though! This walkthrough will serve as a guide on how to locate and defeat all 16 colossi. This first part will go over the First, Second, and Third colossus encounter. We do however have pages for the rest of them, so check the walkthrough index below...

Shadow of the Colossus Walkthrough Index:

Before you Start: Important Tips for Shadow of the Colossus:

Head outside of the temple, then proceed to head south across the field in front of you. Once across the field, you’ll come to a cliff, and you’ll need to dismount from your horse. 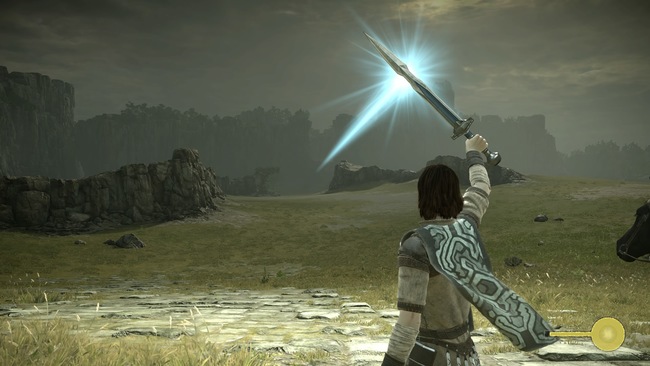 There should be some vegetation growing on the right side of the wall that you can climb on, this following area will have you scaling the cliff and acts as a mini tutorial and will walk you through how climbing controls work. 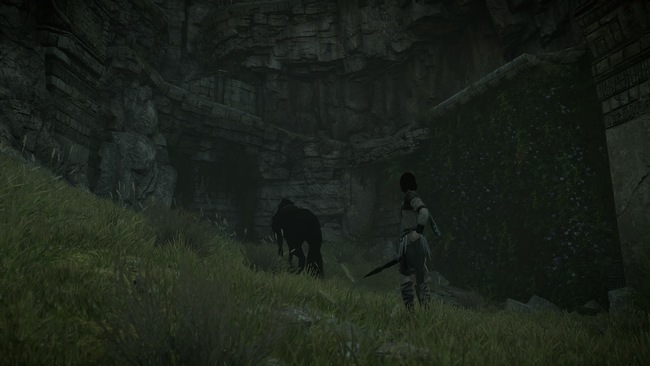 Climb up the vegetation, once you reach the end of it, move along the path that leads left. There should be a gap in front of you, run towards it and jump over. Once across, keep moving left then face forward and climb up to the ledge above. Pull yourself up and head towards the right. You’ll have to jump over another gap, then you’ll reach a bit of rubble you’ll need to roll under. 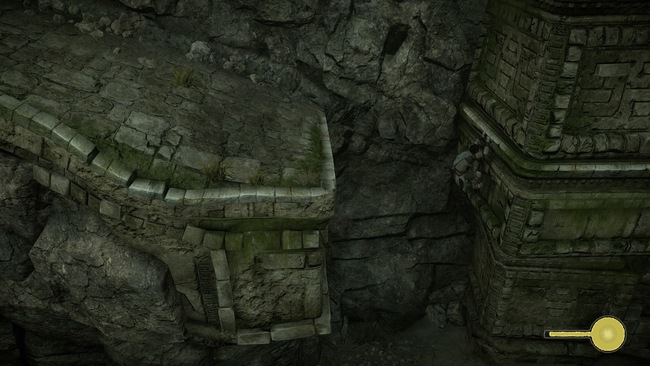 Pull yourself up, the run down the path and get ready for your first big battle.

A cutscene will play introducing you to the first colossus. When you first arrive, it will go about its business until it notices you, and at that point, it will turn hostile. What you’re going to need to do is scale up this beast and stab its weak point to take it down. The weak points on a colossus aren’t always immediately noticeable, so you’ll need to hold up your sword and aim it at the colossus to show you where the weak points are located. 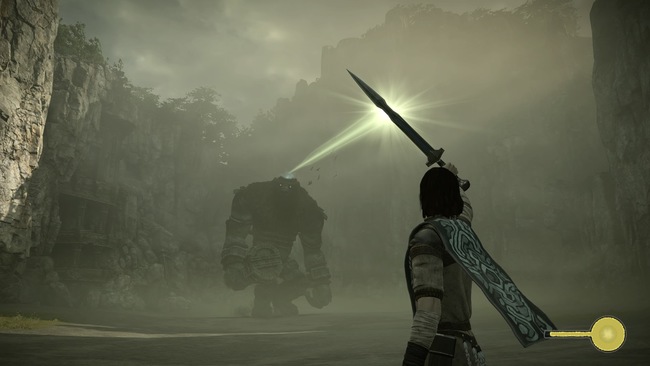 In this case, the Colossus has two weak points, the first of which is a small one on its left leg. You’ll need to get behind it and jump onto the hairy section of its left leg. The colossi’s attacks are telegraphed with long wind ups, so watch its body language and avoid attacks accordingly unless you want to be completely flattened. Wait for it to make a big swing with its club, then jump up onto the hairy section of its left leg and hold on while it’s still recovering. 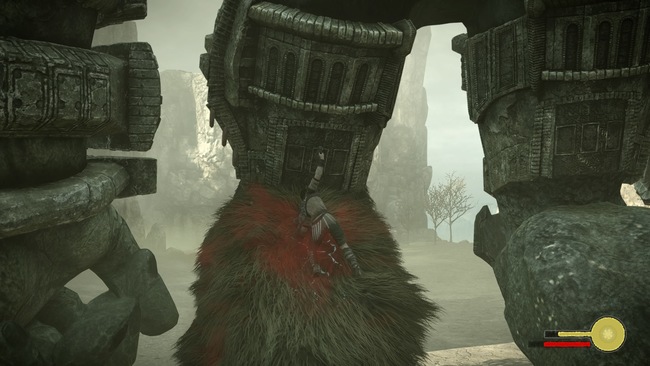 Once you’re hanging on, you should notice a glowing white(red?) mark on its calf muscle, that’s the weak point. When the Colossus isn’t flailing around, hold the [Square button] to charge it up and stab the weak-point. Get a good stab off on the small weak-point and colossus will stagger to its knee, giving you a chance to grab on the ledge higher up on its thy.

From there, keep climbing up and there is a platform you can stand on just above its butt. This is a good chance for you to let your grip meter build back up again, but don’t stand there for too long cause the colossi will attempt to shake you off and you won't be actually gripping onto it. 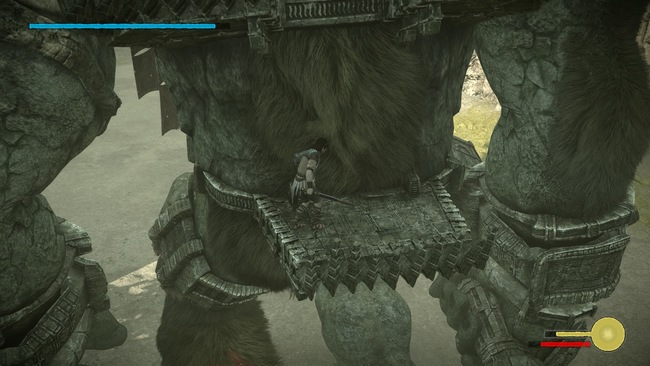 Proceed to climb up its back, your goal is to reach its head. Once you get up around its upper back, you should be able to stand upright. Here you should stand up and let your grip meter refill again before going after its head. The colossus will try to shake you off the whole time you climb it, but the worst of it is when you reach its head.

The second weak point is on the top of colossus’s head. Make sure your grip meter is well filled up before attempting an attack. Once you’re on its head, it should only take 3-4 good stabs from your sword to kill the colossus. 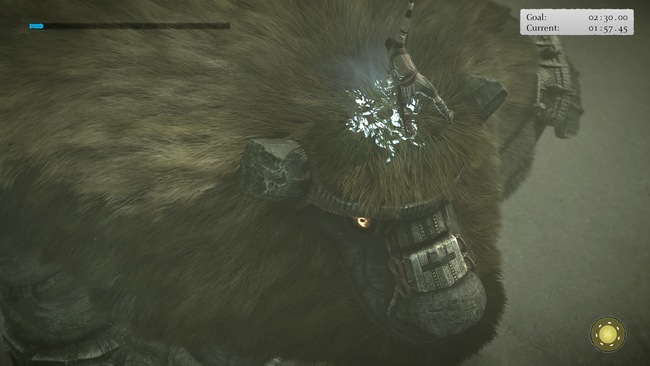 Be mindful of its body language, as when it lowers its head down, it’ll violently rear up in an attempt to throw you off. Falling off here would mean scaling the whole thing again. You shouldn’t have too much trouble though, as this is pretty much the tutorial colossus that gives you a feel of how the rest of the game will work. Each time you defeat a colossus, you’ll be knocked unconscious and teleported back to the temple.

Head out of the temple and circle around to the other side, this next colossus is in the north. From this side of the temple, you should see two pillars, take the path that goes between them. 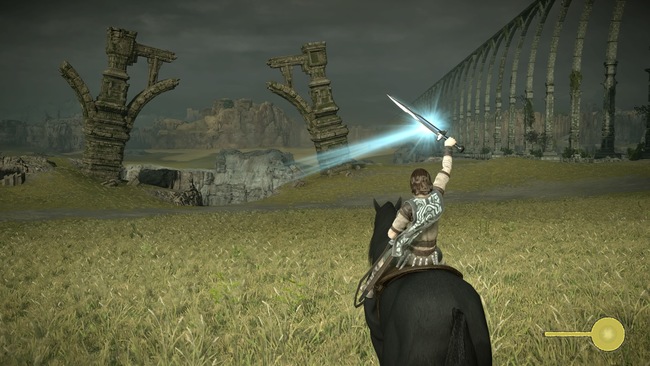 This path will lead you to a natural bridge that lets you cross over the canyon below.As you cross the bridge you will notice a path leading off to your right, head down that path and it’ll slowly take you to the bottom of the canyon. 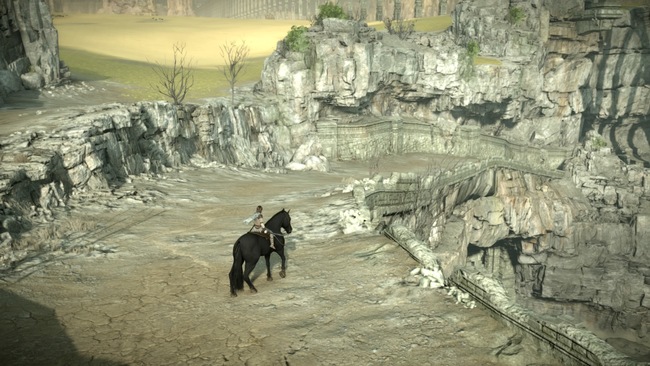 Once at the bottom, you should notice a large stone wall to the north, so take a right head towards to begin the battle with the second colossus.

This colossus is faster than the last and it has four legs, which means you have a bit more dangers to be wary of. You can mount your horse for this battle if you’d like, but it's not mandatory. 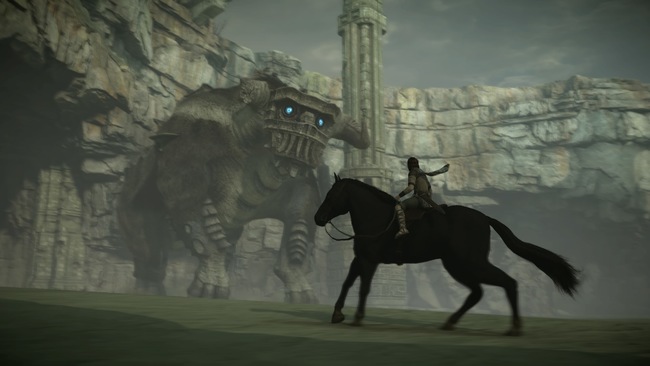 The Colossus has several weak points, with two on its body and four small ones on the soles of its feet. What you’re going to need to do is use your bow to hit the weak points on its feet, that’ll cause the colossus to stumble to its knees. Pull out your bow and position yourself behind the colossus.  Aim your bow at its feet and when it takes a step, you should see the weak point, fire on it with your bow. 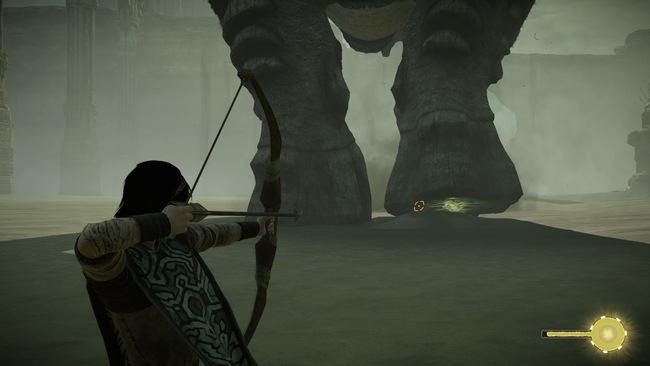 When it’s on its knees proceed to run up the hairy section on its knee. The hind legs are the best place begin your attack because the first weak point is on the rear of its torso. 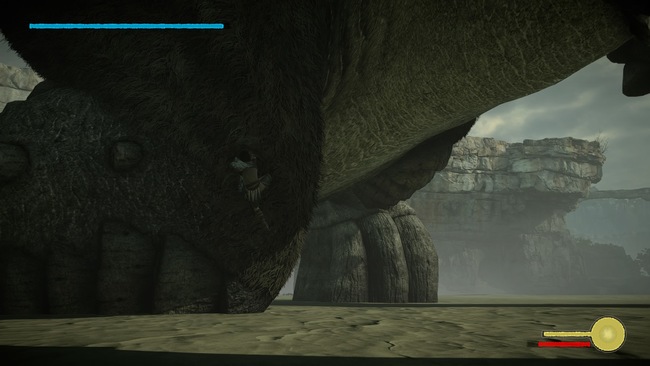 Once you’re up its leg and on its back, you should move towards its rear and the weak point will be just below its spinal fins. The Colossus may try to shake you off but its back is quite broad with plenty of places to hold on to, so you should be able to get off 3 good stabs on this weak point. The weak-point will then fade and you will need to move towards its head for the second weak-point. 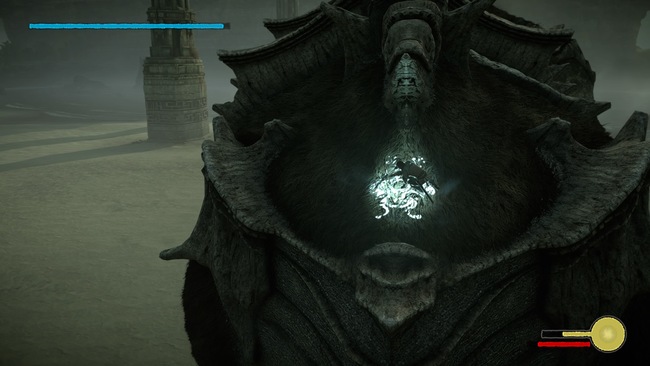 The only real obstacle in your way to its head will be a couple stone bits of its spine you’ll need to jump and climb over. The final weak point is on the top of its head, make sure your grip meter is full as once you get on its head, it’ll shake from side to side in an attempt to throw you off so hang on tight. If you need to you can run back on its shoulders and stand up to refill your grip meter. 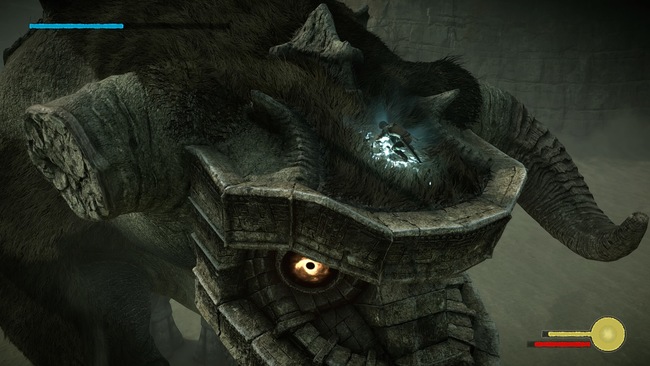 Thankfully you only need to land about 3-4 good stabs on the weak point before the colossus topples over and you win the fight.

Circle around to the back of the temple again, head north just as you did before towards the canyon. Cross the bridge, but this time take the path to the left. If you raise your sword once on the other side, the beams of light should focus on a mountain range to your left; head towards them. 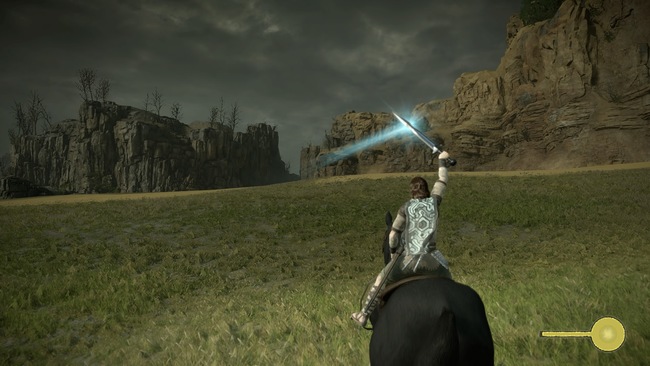 Once you reach the mountain range, you should notice a large path leading inwards. Go in there and a cutscene will trigger revealing a lake with a large platform in the middle of it. The platform is where the Colossus is. You should notice a long narrow walkway on the left side of the platform, dismount from your horse and jump in the water. 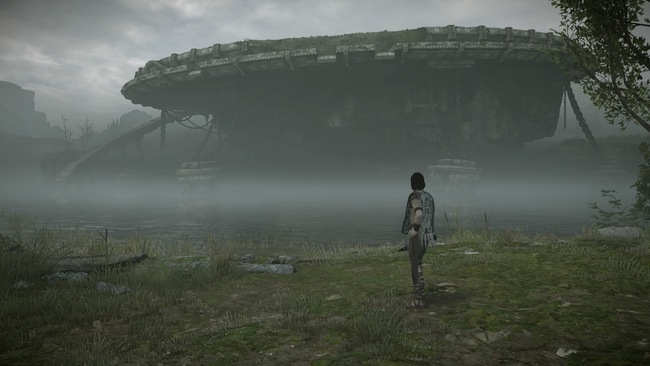 Swim across the lake and towards the part of the walkway that’s coming out of the water. Run up the walkway, at the end of it should be a pillar just off to your right that you need to get to. 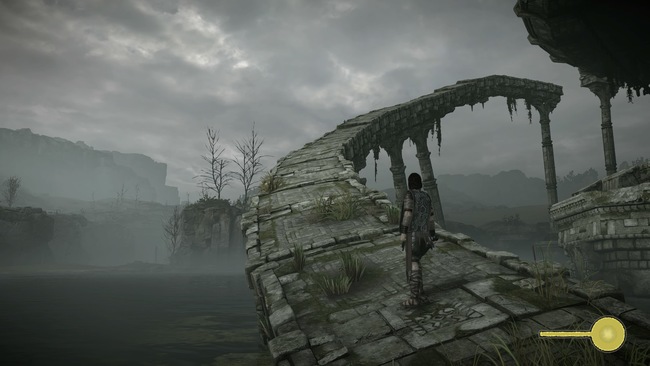 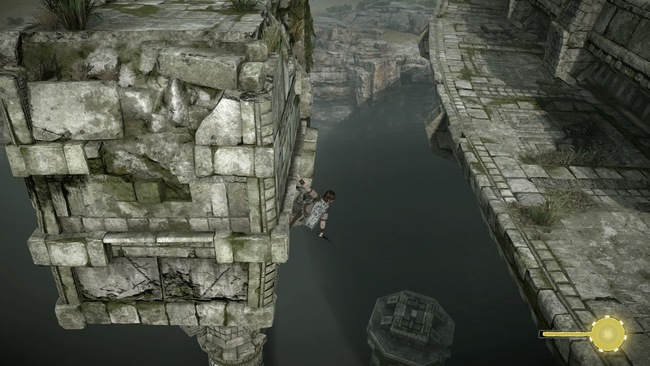 This should place you on another narrow walkway, move to the right to find and you will find a small hill you can run up to finally get to the top of the platform and face the colossus.

There are two weak points on this colossus, but the process of reaching them is a bit more creative. This colossus had a tower-like club connected to its right arm(let’s call it a tower-club to avoid confusion), and you’re going to want to climb up onto it. However, it has a large bracer on its wrist that will prevent you from getting further up its body. What you need to do is shatter the bracer. 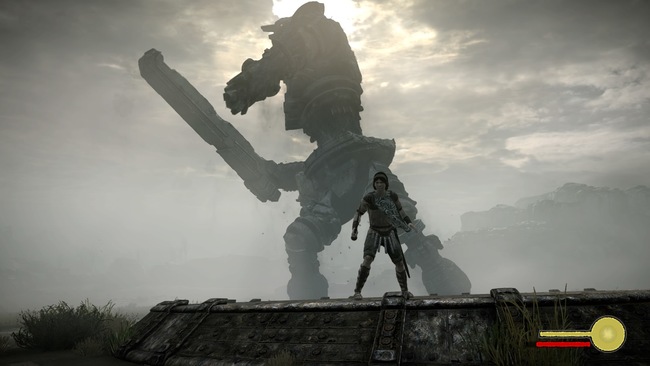 In the middle of the arena is a circular iron pad, you’re going to need to stand on it and have the Colossus hit the pad with its tower-club and the bracer will shatter. The Colossus has two attacks, one downward stab, and one big overhand swing. Stand on the iron pad and wait for it to start a swing, then move out of the way before it squashes you. If its tower-club connects with the round stone pad, the bracer will shatter.

Now you’re going to have to get on the colossus, be careful though as this one will try to shake you off far more than the previous two colossi. Wait for it to do the big overhand swing, once it hits the ground, you can run up the tower-club and jump on to the hairy section of its right arm. Begin climbing up the arm and move through the section where the bracer piece broke off. 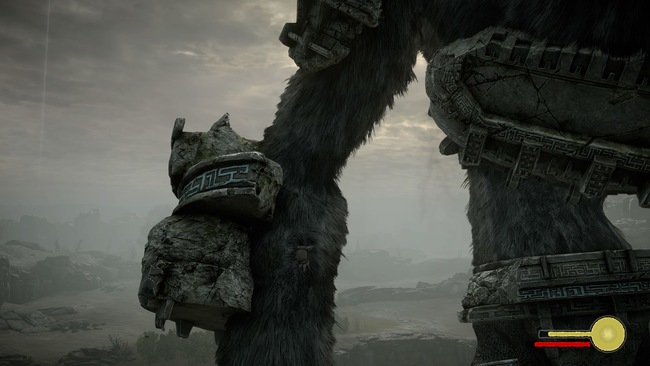 You can stand on the bit of bracer that remains. Once you’re standing on the bracer, you should notice a platform that goes around the colossus’s waist like a belt. Jump onto the platform, the first weak-point is on the colossus’s belly area. Climb up its hair here and stab the weak point 3 times, once you’ve halved its health the weak-point will disappear. 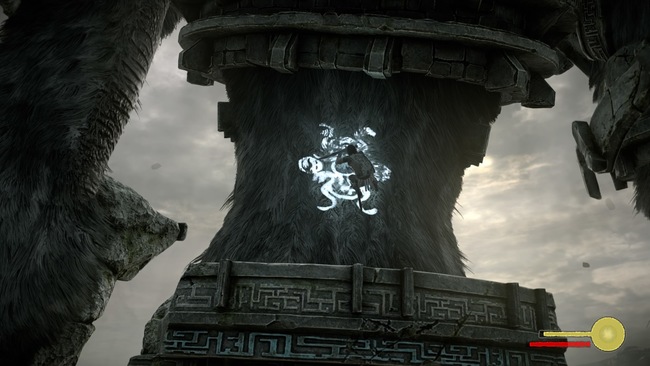 The second weak-point is on top of its head. Run around the belt-platform so that you’re positioned by its lower back. From here leap onto its left arm, move up the hairy section of its arm all the way to where you’re on its shoulders. 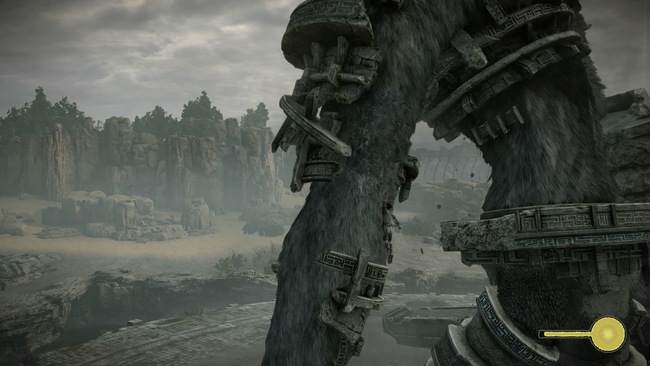 You can stand up straight on its shoulders here to recover grip meter if you have to. You should see the weak-point glowing on the very top of its head now. Once you’re on top of it, the colossus will flail around a lot. It has one maneuver where it’ll lean forward to try to shake you off that’s particularly tough to deal with. 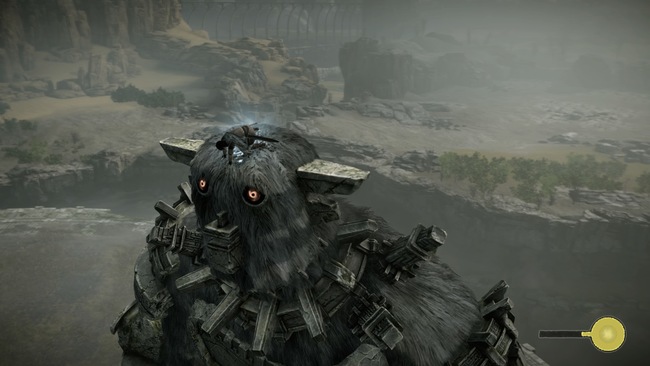 Make sure you have plenty of grip meter while on top of its head, and back off onto its shoulders if you need to recover the meter. It should only take about 3 good stabs to finish off the colossus and end the fight.

» NEXT: Taking down the Fourth, Fifth, and Sixth Colossi »

Shadow Of The Colossus Walkthrough & Guide Part 2: How to defeat the Fourth, Fifth, and Sixth Colossi

Shadow Of The Colossus Walkthrough & Guide Part 4: How to defeat the Tenth, Eleventh, and Twelfth Colossi

Shadow Of The Colossus Walkthrough & Guide Part 3: How to defeat the Seventh, Eighth, and Ninth Colossi

Shadow Of The Colossus Walkthrough & Guide Part 5: How to defeat the Thirteenth, Fourteenth, Fifteenth Colossi

Shadow of the Colossus 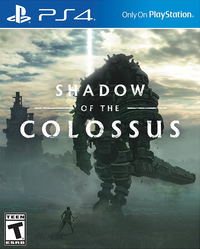 Shadow of the Colossus Screenshots

Shadow of the Colossus Artwork