Pokemon Quest had only been out for a few hours, before Pokemon fans had dug deep enough into the game to discover their first Shiny Pokemon. In fact, it seems like Pokemon Quest might be the best game ever for easily catching those super rare shinies.

It took fans over on reddit and twitter a matter of hours to discover that Shiny Pokemon exist in Pokemon Quest, with pictures surfacing of things like a Spearow with the golden-green shiny sheen and a Zubat sporting a sickly-green color instead of its usual look. All of these line up with the shiny form colors for those breeds of Pokemon as featured  it has as a shiny form in other Pokemon games, so it looks like the entire game will have shiny options that match up to the rest of the series.

If you're not so familiar with them, Shiny Pokemon are essentially super-rare variants of the same Pokemon but with unique coloring. In the main games the most famous and commonly encounted shiny is the Red Gyarados from Pokemon Gold, Silver and Crystal, but every single type of Pokemon has a shiny variant, even legendaries. Shinies have appeared throughout the whole Pokemon series since Gold/Silver, and shiny Pokemon even feature in things like Pokemon Go - so it's no surprise to see them show up at the Base Camp in Pokemon Quest from time to time. 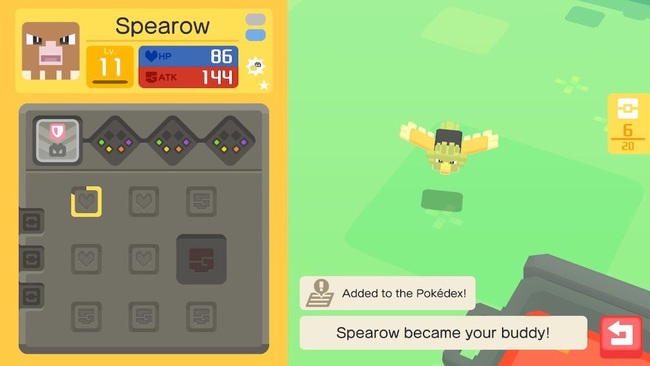 How to get Shiny Pokemon in Pokemon Quest

Given just how quickly they showed up on reddit and twitter, it does seem as though Pokemon Quest has a higher rate of Shiny Pokemon than most other games in the series. Usually shinies have a tiny, tiny percentage chance of appearing, and though they're still rare in Pokemon Quest the number that have cropped up within the first few hours of day one seems to suggest they have a higher encounter rate and odds of appearing than is normal in other Pokemon games.

If you want to get a shiny, all you can do is keep recruiting and drawing Pokemon to your base camp over time. This is done through Pokemon Quest's cooking - so hit up out Pokemon Quest recipe list for help with cooking and making proper use of the ingredients, which in turn will attract more Pokemon or even specific types of Pokemon to your base camp so you can have them join your exepeditions. Keep an eye out for Pokemon that have an abnormal color - as mentioned and pictured above, these are your shinies!

As a side note, it's worth remembering that you can safely evolve shiny Pokemon too - they'll keep their shiny status in their evolved form. If you want to know when or how to evolve it, check out our Pokemon Quest Evolution Levels List.

Keep in mind that shiny Pokemon aren't actually any different to regular Pokemon of the same breed and type - they just look different. They won't give you any extra power boost on expeditions - they exist solely for collecting and for bragging rights. Still, it's pretty awesome they're in Pokemon Quest

Pokemon Mystery Dungeon DX Shiny Pokemon: where to find and how to catch shinies