Pokemon Quest Move Stone Guide: what every move stone does

New mobile spin-off Pokemon Quest presents a streamlined version of the Pokemon mechanics we know and love from the core Pokemon games, but just because it's on iOS and Android (as well as Switch!) doesn't mean there's some decent RPG depth hidden away in there. Pokemon still grow, level up and evolve - and you'll still find yourself coming back from expeditions and quests with rewards and loot - including Power Stones and Move Stones with cryptic names like the 'Stay Strong Stone' and 'Broadburst Stone'.

Power Stones are essentially the 'basic' stones, and all they do is boost your Health and Attack stats. They're useful for powering up your Pokemon and even for manipulating the game to get your choice of Eevee Evolution, but they're fairly run-of-the-mill. More interesting are the Move Stones - special stones that evoke more specific effects in the Pokemon they're equipped to. On this page, we're going to explain what they all do. 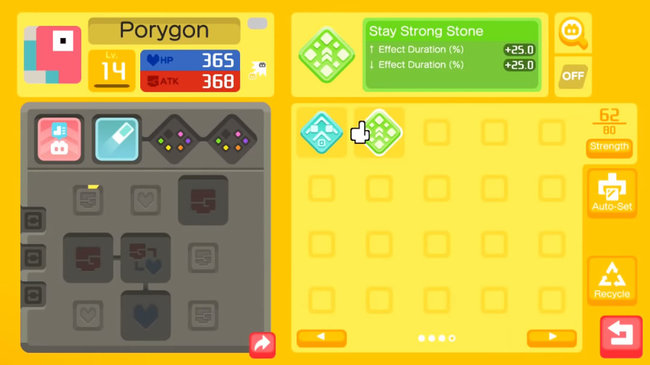 Pokemon Quest Move Stone List: every move stone and what it does

Each Move stone has its own color and its own effect - we're going to list both here. The move stones are the Broadburst Stone, Scattershot Stone, Sharing Stone, Stay Strong Stone, Wait Less Stone and Whack-Whack Stone. If you're confused what one does, sit tight - we explain every Move Stone in Pokemon Quest below, and most of them do things to augment, adjust and buff the various moves Pokemon can learn in Pokemon Quest. Let's dig into what they all do.

The Stay Strong Stone is useful for Pokemon that use buffs on themselves, or debuffs on enemies. It increases buff durations across the board by 25%, and does the same for the negative effect of debuffs. Keep in mind it doesn't impact or lesson the effect of negative buffs applied to that Pokemon by enemies.

The Broadburst Stone is great for Pokemon that have strong ranged attacks - it boosts both the width and therefore the range of beam-type ranged attacks. Any Pokemon that fires projectiles as its primary means of offense can be massively buffed by using this move stone.

Pokemon Quest does make team synergy with your Pokemon of choice matter at elast a little, and this is a useful move stone to help out with that: the Sharing Stone makes it so that any abilities that positively effect the user will also have a positive impact on nearby allies to the tune of 25% of the original buff's power. There's one catch, however: this buff won't work with healing moves. That'd be, well, broken.

Remember that useful Broadburst Stone for ranged Pokemon? Well, it's got a bit of a rival... the Scattershot Stone is a neat Pink move stone that actually buffs ranged attacks by simply upping them - literally, it increases the number of projectiles fired by 1, potentially upping the damage output significantly. There's a catch, however - it reduces the Attack power of a move by 15%. If it hits the extra projectile will more than balance that out, mind.

The Wait Less stone is one of the move stones that has one of the least obscure names - it does pretty much exactly what you'd think from the name, and this is reduce the amount of time a Pokemon must wait after using a move before they can use it again by 5% of the overall wait time. It's best used on the stronger moves that have long cooldown times. If you want raw power and speed isn't a consideration, there's a stone for that too...

Whack-Whack sounds a little weird, but the name does make sense when you know what it does: it makes any given attack land twice. This is a great stone, even considering that when equipped all the moves you use will have a longer wait time, making it the opposite of the Wait Less stone. It's really useful when added to a high-power move, even with the cooldown debuff.