Dancer is one of the recurring special classes that have been appearing in numerous Fire Emblem titles. Characters with this class are highly valued because of their special Dance action which allows an ally character who has already acted to make another move within the same turn.

Being the latest mainline game in the series to date, Fire Emblem: Three Houses also has the Dancer in its class list. However, there is a specific method to earn this class as it is not available through the normal class change and certification system. You can read more details on how to unlock the Dancer class in Three Houses right below.

The chain of events that ultimately unlocks the Dancer class will happen in Month 12, before the time skip. You must explore the monastery within the first two weeks of the month; when you do that, there is a quest named White Heron Cup which is only available within the timeframe.

After you accepted the quest from Rhea, you can talk with a student whom you have recruited into your house to have them represent your house in the dancing contest. Both female and male characters are eligible for the contest - and thus for the Dancer class as well.

However, as this is the only event that unlocks the class, only one character may assume the Dancer class in a playthrough. So make sure you choose the one character that you really want to make into a Dancer. 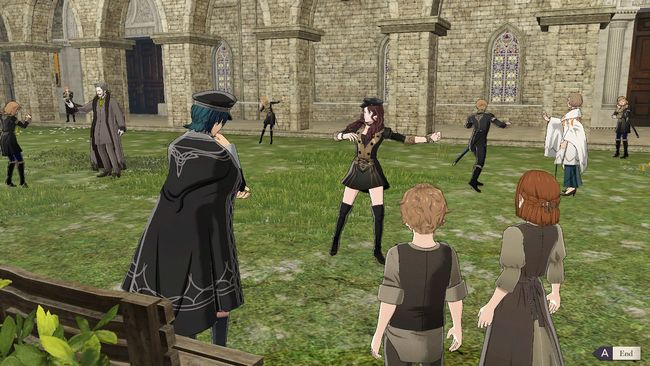 Once you've made your decision, you can then talk with Manuela to learn the minimum Cha stat required to win the competition. In most cases, the winning threshold seems to be 13. After that, you can talk again with your chosen candidate to initiate a special training session that increases their Cha by 5. If you feel that is not enough, you can also do more things like feeding them Golden Apples and Black Pearls if you have any or even inviting them to a tea party as well.

After you have prepared everything, you just need to wait until the White Heron Cup is held right after the second lecture day of the month; that's when the quest will also be marked as complete. If everything goes well, the character you've chosen and trained will win the competition and earn the exclusive Dancer class.

Check out our full Fire Emblem: Three Houses guide, which has information and tips from help for beginners to advanced battle strategy, including methods to unlock more specific classes such as Dark Mage and Dark Bishop.

Who is the best Dancer candidate?

The winner of the White Heron Cup will also gain the Sword Avo +20 ability and Sword Dance combat art in addition to the Dancer class, which grants skill experience bonuses for Sword and Authority when equipped. Dancer is also one of the few classes that are able to use magic. With those points in mind, you will want to consider a character who is good in both sword and magic to make the fullest use of all the perks received.

Whether you are choosing the Black Eagle House or recruiting characters from another house, Dorothea is arguably the best overall candidate for this class. As she has a background on working in the opera, that is already a very strong reason setting-wise to consider her. On top of that she works with the stats, too: she excels in Sword and Reason, with a budding talent in Faith that eventually lets her learn some healing magic as well.

Dorothea even retains her default attire with the Dancer class later on after the time skip, indicating that this indeed is one of her canon classes. 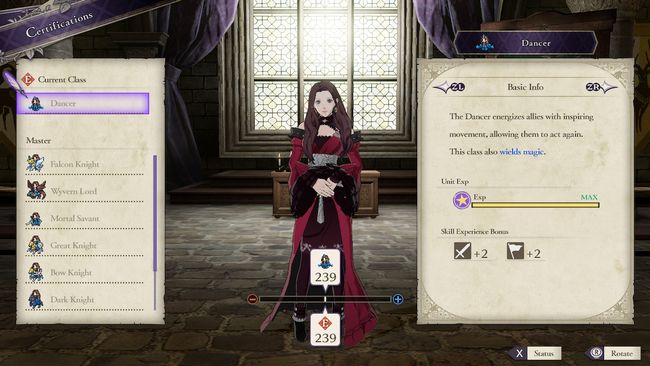 If you want to consider some more alternatives, these are the characters that we can recommend to become a Dancer based on their natural, base-line skills:

But in the end, you can make your own final choice for the Dancer candidate as all students that have been recruited into your house as of Month 12 are eligible. It's also very easy to increase their Charisma stat beyond the winning threshold if you have the resources.