Final Fantasy VIII might be about saving the world from evil magic, but let's face it, it's also about cards. It's about Triple Triad. It's about Shuffle or Boogie, that amazing theme music. It is an absolutely key, major part of the FF8 experience - and collecting the rare cards and completing the Card Queen side quest is something of a rite of passage as much as passing your SeeD exam.

There is a little bit of a problem with triple triad and rare cards in particular in FF8, however - the system is rather obtuse, just like things like the FF8 weapon upgrade system. The final three ranks of card in the game - level 8, level 9 and level 10 - represent GFs and major players in FF8's story - and all of these cards are one-of-a-kind. There's only one place to get them, and sometimes some strange steps are involved.

It gets stranger still when you involve the Queen of Cards, a NPC who causes new cards to appear in the world only when you lose existing rare cards to her - which completionists will want to do, but then win back the other rare card you lost along the way.

Anyway, on this page we break all that down nice and easy - we list every rare and unique triple triad card in FF8 out, explain how to get it, and best of all list the rare cards in order. That means if you follow this guide from the start of the game, it'll guide you to 100% completion on all the rarest, one-off cards, avoiding any missables. 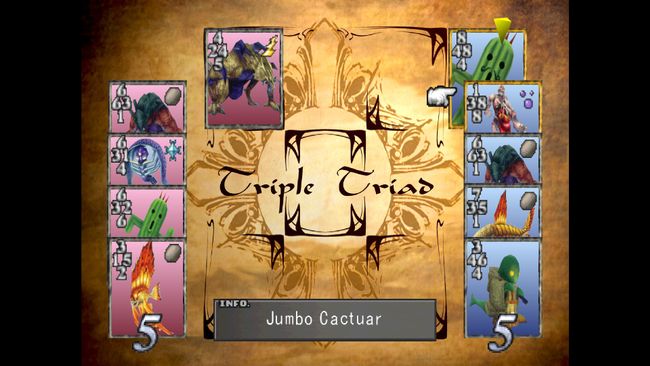 These instructions run from the very start of the game, though we've tried to keep them as spoiler-free as possible for later events, but it does reference characters and locations from right throughout the game. It's in order, so if you're further in the game and are missing a card, do try to backtrack.

Among this, we've listed the card queen quest steps - and we suggest you undertake them when they're placed in our list. Regardless, they must be undertaken in order - step 3 won't do anything until 1 and 2 are complete, and so on.

Before leaving Balamb for your SeeD Missions, be sure to obtain MiniMog as described above and then lose it to the Queen of Cards in Balamb, outside the train station. Save your game before you challenge her - because you may need to save scum this one!

Anyway, to progress, play a match with a bunch of low-level cards and MiniMog, and deliberately lose the match. This will make a rare card (Kiros) appear later on, and you will have an opportunity to regain MiniMog. It's best to do this before leaving Balamb for Timber, but you can backtrack to Balamb later if need be.

If this appears to not be working based off soft reset alone, try using a draw point to reset the game's hidden random counter, then challenging her again. Exactly how difficult she is to manipulate depends on the version - the PS1 and older PC versions are easier to manipulate in this way with soft resets than the newer versions. The Card Queen can actually move all the way around FF8's map to basically every major location - but we want to save scum to manipulate her so she only moves between Balamb and Dollet all game. This will make your life a lot easier, and allow you to complete the card queen quest earlier and more efficiently.

Once you've completed the train mission with Rinoa, you'll eventually get some world map freedom. One entirely optional place you can now visit is a much more peaceful Dollet, and this is where the Queen of Cards now resides. So long as you lost the MiniMog card, the Queen is now inside the Dollet Pub. Speak to her, and ask her about her father.

Once you've spoken to the Queen of Cards about her father, you'll be able to win back the MiniMog card from the Queen of Cards' son, the kid who paints bones on his grandpa's paintings, also in Dollet. It's inside a house opposite the pub.

Now that you have the Sacred card, head back to Dollet before advancing the story further in Deling. Lose the Sacred card to the Queen of Cards in Dollet; she will now move again. The same scummy rule applies as before - save your game, and quit and reload if she says she's going anywhere ut back to Balamb.

Pretty much right away you can once again win back Sacred, once again from the Queen of Cards' son.

Now that you have Chicobo, it's time to go lose it as the next step in the Card Queen saga. The Queen is back in Balamb now, as you might remember. Lose Chicobo to her - she'll then be on the move again. Apply the same logic once again - save your game, and quit and reload as many times as needed until she heads back to Dollet.

You get the idea - we want her to ping pong back and forth between Balamb and Dollet, as they're easiest. Follow her to the Dollet Pub and again talk to her about her dad. While there, win back Chicobo from the Card Queen's son.

It's time to return to the card queen - she'll still be in Dollet. Play against her and this time, lose Alexander. Again, you can reclaim Alexander from her son by beating him pretty much right away. Once again, do the save and quit trip until the Queen moves herself back to Balamb. Don't accept anywhere else unless you want to make the trek.

Now take your newly obtained Doomtrain rare card back to the Card Queen - she's now back in Balamb, if you've followed our instructions. Then head to Dollet to reclaim it from her son.

End-Game Card mop-up with the Queen of Cards

Once you reach what is the game's fourth disc and final stretch, the Queen of Cards will be your depository for things you may have missed - she'll have the cards from her own quest line that you didn't get properly, plus any cards you lost to her that you failed to win back from her son.