Zelda: Link's Awakening - how to get past the Raccoon with the Toadstool and Magic Powder

The Legend of Zelda: Link's Awakening is an extremely faithful remake to the beloved 1993 original - and that includes a couple of more obtuse puzzles right from the early stages of the game. Your first major hurdle is an annoying Raccoon in the Mysterious Forest - and to get past him, you'll need some Magic Powder - and to get the powder, you'll need a Toadstool. Here's how to do all that, step by step.

When you first enter the Mysterious Forest, you'll see a happy-looking Raccoon hanging out to the north of the area. The mysterious forest isn't quite like the Lost Woods from other Zelda games unless you get too close to the Raccoon - if you do, he'll use some sort of magic to teleport you to a different bit of the forest, getting you lost for a moment in the process. It's not only annoying, but a big problem: the Raccoon is guarding the area that leads directly to the chest that contains the Tail Cave Key, which you need to unlock and enter the first of the dungeons in Link's Awakening.

Once you're a little further in Link's Awakening, check out our page on how to find and unlock the optional Color Dungeon, which has some great bonuses. If you're getting stuck into the dungeon creator, we've also got an amiibo guide and compatibility list, plus instructions on how to steal from the village shop if you want to get items early. 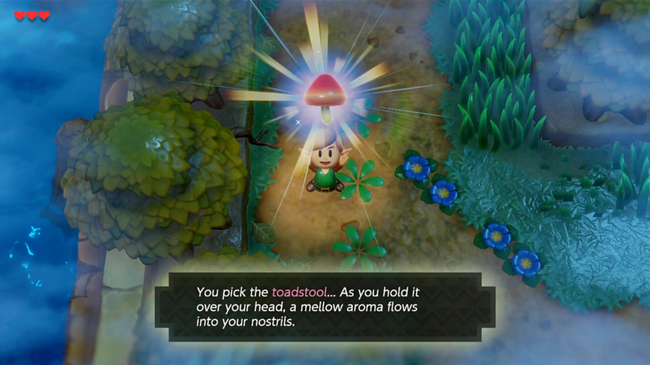 Finding a Toadstool and getting Magic Powder

Instead of trying to get past the Raccoon to the North, instead take yourself down a few screens and look to the right. You'll eventually come across a cave entrance, and there's even a signpost outside that tells you to watch out for cracked floors. If you haven't encountered these before, cracked floors fall away once stepped on to create bottomless pits - so do indeed be careful.

Inside the cave you'll find a few Keese enemies and some cracked floors, plus blocks you can push and crystals to smash. Grab the chest in the first room if you want some cash, but then head up and left to get into a room with a block push puzzle. There's a Piece of Heart in here, but don't get hung up on that - you can't get it right now, so just forget it. All you need to do is get to the exit on the bottom of the screen. The answer here is pretty simple: just push the two stones on the bottom right down, and then you'll have a path south.

This kicks you out of the cave into a new area. There's a Moblin here, so get rid of him and then grab the Toadstool that's hiding away behind some bushes. This item is key to getting rid of our annoying Raccoon friend, but we have to get it turned into Magic Powder first.

To do that, head back through the cave you just exited and backtrack to its entrance. To get back through the block puzzle, push every block available to you right, and then the final rock up. Now head up and right, past another cave entrance blocked by rocks you can't yet lift. Eventually you'll exit the forest into a sunny area. Once you do, follow the path south. You'll see some creepy trees that flank an equally creepy house - a Witch leaves here.

Head inside. The Witch is friendly, and if you present her with the Toadstool she'll make you some Magic Powder. This powder has a variety of functions - sprinkle it on unlit torches to light them, or onto enemies or other obstalces for often random effects. It's a really useful item right the way through Link's Awakening. 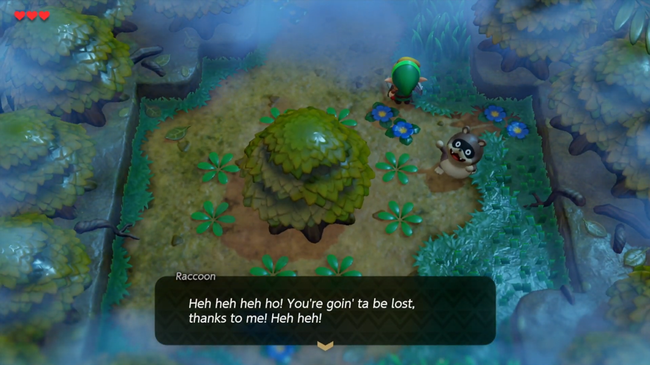 Getting past the Raccoon in the Mysterious Forest

So you know what's coming, right? The Magic Powder is your ticket past that Raccoon without him stopping you and teleporting you somewhere else random in the forest. Backtrack through the forest and go to the Raccon. Don't try to walk past him, and don't try to talk to him - instead walk right up to him and sprinkle some Magic Powder on the Raccoon...

Surprisingly, the Raccoon isn't a mischevious animal at all, but rather is somehow Tarin, the man whose house you woke up in. He befell some spell or something out in the forest. Maybe he ate one of those Mysterious Toadstools. Anyway, with the Raccoon gone, turned back into Tarin, you can now head north. Just north of the spot where the Raccoon hung out is a chest containing the Tail Cave Key - and you can use that to get into the Tail Cave down by the beach. That's dungeon one, and the real start of your adventure - so go head there!

Zelda: Link's Awakening Trading Sequence guide: how to get the Boomerang by swapping items

Zelda: Link's Awakening amiibo: how to use amiibo, compatibility list and item unlocks