Shops are something of a staple of Zelda series, and The Legend of Zelda: Link's Awakening is no different, with the hub of Mabe Village having its own little Tool Shop that sells items including Bombs, Shields, Pieces of Heart and the coveted but expensive Bow and Arrow. Some of these items - especially the latter - cost a pretty penny, but if you're willing you can steal from the shop. On this page, we're going to teach you how to steal in Link's Awakening.

Petty theft will save you anywhere between 10 and 980 rupees depending on what it is you're stealing. Theft will be most tempting after you get the bombs for the first time - as at that point the bow and arrow appear in the shop, but are so expensive that you probably won't be getting them legally for a good few dungeons. That's fine - they're not really required to progress the game - but if you want them, stealing is an option.

If you want a little more help with Link's Adventure to wake the Wind Fish, check out our guides on how to find the optional Color Dungeon and how to get past the Raccoon with the Toadstool and Magic Powder - plus our run-down of amiibo compatibility and how to use them. 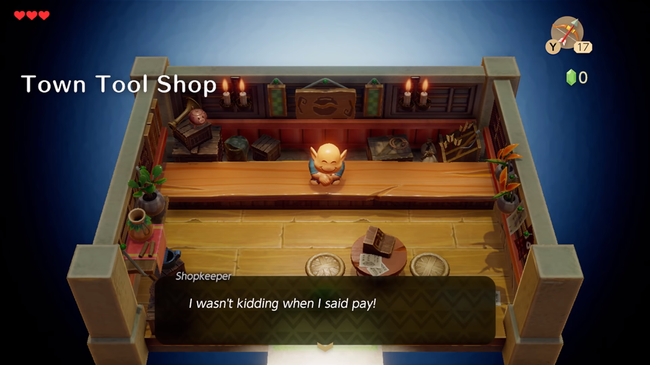 How to Steal from the Shop in Zelda: Link's Awakening

The shop is laid out pretty simply in Link's Awakening - a counter on the back features the items you can buy, which you walk up and pick up, hefting it abouve your head like any other item in the game. By default, what you should then do is walk over the shopkeeper, who has a counter to the right of the door, and pay. But that costs money. So, for the unscrupulous among you... here's how to steal.

The first step to stealing is to pick up the item you want. You'll notice when you walk around the room with an item in hand that the shopkeeper watches you very, very closely indeed. His gaze follows you around the room, and if you try to dash for the exit with the item, he'll shout out and stop you from leaving without paying.

In order to get past the shopkeeper to steal something, you have to make him dizzy. This is pretty simple: pick up an item, and then instead of walking up to him or to the door, walk circles aorund the shopkeeper over and over again. He'll follow you, turning around on the spot, and eventually he'll get dizzy and fall behind - at this point you can dash for the door with the item while his back is turned. Once you're out of the store, the item is yours.

Stealing can be useful if you don't mind Link being branded a criminal - progression requires you spend hundreds of rupees on a shovel to find the golden leaves in Kanalet Castle, for instance, and you'll likely want the bow sooner rather than later - but just be aware of what stealing means.

Beware, however - stealing has consequences in Link's Awakening. For one, the shopkeeper knows you and what you stole, and so the next time you visit the shop he will punish you with a powerful magic attack that causes an instant Game Over. Beyond even that, however, the citizens of Koholint Island will know Link is a Thief and even bring it up in conversation. In the Game Boy original, your name is changed from Link or whatever you entered it to... to THIEF. You've been warned!

Zelda: Link's Awakening Trading Sequence guide: how to get the Boomerang by swapping items

The Legend of Zelda: Link's Awakening Hands-On Impressions (with Video) from E3 2019

Zelda: Link's Awakening - how to get past the Raccoon with the Toadstool and Magic Powder