Final Fantasy VII Remake Dresses: how to get every Wall Market dress for Tifa, Cloud, and Aerith

Situated near the very middle of Final Fantasy VII Remake is the Wall Market area of Midgar, which takes place during the aptly named Chapter 9: The Town That Never Sleeps. Wall Market is a memorable throwback to the original, where bright neon lights and the ability to play dress-up come before fighting baddies and leveling up materia, and the same is true in the remake -- though admittedly you’ll have to do some more fighting here this time.

Just as in the original the Wall Market section of FF7 Remake features a variety of dresses each character can acquire - three each for Cloud, Tifa and Aerith. Each of the three has a unique way their outfit for the bridal ceremony is decided - and there's a trophy in it if you see them all. This guide obviously contains visual spoilers for the dresses you can acquire for each character, and light story spoilers for Wall Market side quests.

A big part of Wall Market culminates in our three heroes lining up for Don Corneo in their respective dresses. Tifa, Aerith, and Cloud all have 3 possible outfits giving 9 total dresses, and seeing all 9 will result in earning the trophy Dressed to the Nines. All three characters have slightly different requirements for obtaining their respective gowns, so we’ve listed them below so that you can easily grab them all for the trophy.

One important thing to note: Chapter 9 has two sets of quests, depending on the choices you make early in the chapter. While these quests will not affect Tifa or Aerith's dress, they will partially determine what dress Cloud gets. We will keep the most up to date details in his section of the guide.

How to Choose Tifa’s Dress: The Alone At Last Discovery 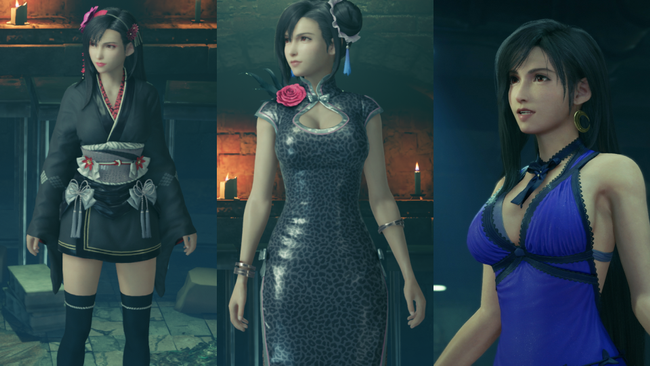 Tifa’s dress is by far the easiest to determine, though it will require a few chapter playthroughs of both Chapter 3 and Chapter 9 to see them all. After completing all six quests in Chapter 3, you’ll get an invitation to Tifa’s apartment during the Discovery event: Alone at Last. At the end of this event you’ll be able to choose her eventual dress from a simple dialogue choice:

You’ll be able to verify the dress you obtained as soon as you first spot Tifa in the chocobo carriage after leaving the Collapsed Expressway. 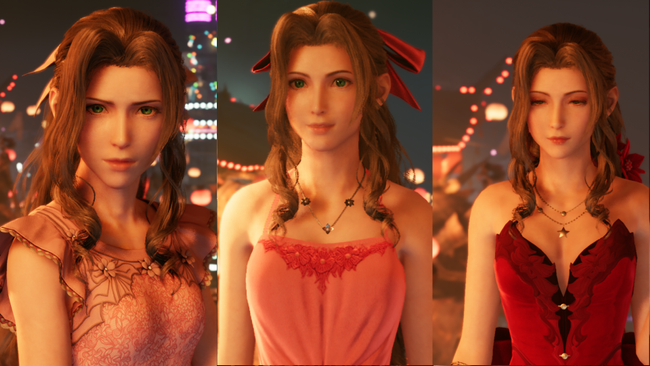 Very similar to Tifa’s dress, Aerith’s dress will depend on what you do during your chapter alone with her, which in this case is Chapter 8. This time however, your dress is not determined by a dialogue choice, but simply How Many Quests You Complete.

You’ll be able to know which dress you’ve obtained based on Madam M’s comments about how helpful Cloud was to the people of Sector 5.

We've got even more to our Final Fantasy VII Remake guide and walkthrough if you need it. Check out our guides on how to get all the limit breaks, our full weapon list, summons guide, music disc locations, enemy skills and, while you're ruining Don Corneo's day, how to unlock those red dragon doors.

How to get all 3 Cloud’s Dress Outfit options 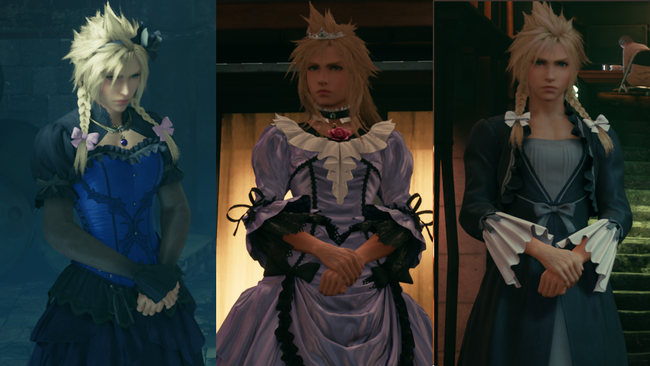 Cloud’s dress is determined in a manner similar to Aerith’s but with a twist. Your result of dress is determined by completing quests, but this time in Chapter 9 itself. The tricky thing is: Chapter 9 has two different pairs of quests that you may undertake -- you’ll either end up doing errands for Chocobo Sam, or for Madam M shortly after taking on Hell House in the Corneo Colosseum.

As we stated in our Side Quest guide page, there are several factors at play for determining which pair of quests you get in Chapter 9, including whether you interact with Johnny, your choice of Massage Course, and your comment on Aerith's dress, and others. Each dialogue choice made in Chapter 9 will push you either towards Madam M's pair of quests, or Chocobo Sam's. If you wanna see the complete breakdown for each decision, you can see that on our Choices guide.

To get Sam's two quests 'The Party Never Stops' and 'A Dynamite Body':

To get Madam M's two quests 'The Price of Thievery' and 'Shear's Counterattack':

Now that you know how to get each version of Chapter 9's available quests, here's how you turn that into Cloud's dress options:

If you manage to get Sam's two quests to trigger, one of the two will be very nostalgic for players of Final Fantasy VII. While the early part of Wall Market is fairly straightforward, you’ll eventually get the opportunity to run around town doing a few errands that should be very reminiscent from the original game during the quest The Party Never Stops. You’ll get a chance to undertake this quest and others while Madam M. is setting up Aerith with her new dress. This quest is a bit unlike the others, since what you can accomplish and earn depends slightly on what level some of your materia is at. While none of the outcomes are really super significant in the long run, we’ve listed here what you can all get if you’ve leveled your materia high enough during each individual section of the quest. 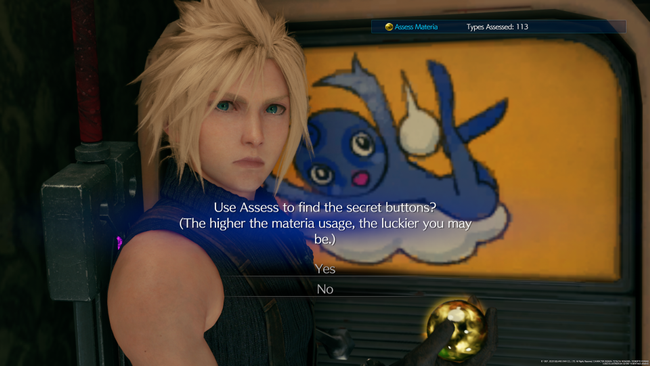 After following Johnny to the clothing store and materia shop, you’ll eventually find yourself at the vending machine inside of Wall Market’s regular inn. Your goal here is to find ‘The Sauce’ for the materia shop owner, and your chance of success depends on how thoroughly you’ve been using the Assess materia up to this point. On our first runthrough of the quest, we were able to get Vitalabrew, Crimson Spike, and The Sauce with about 30 enemies properly Assessed. Your reward for getting all of the possible items is a simple Moogle Medal. 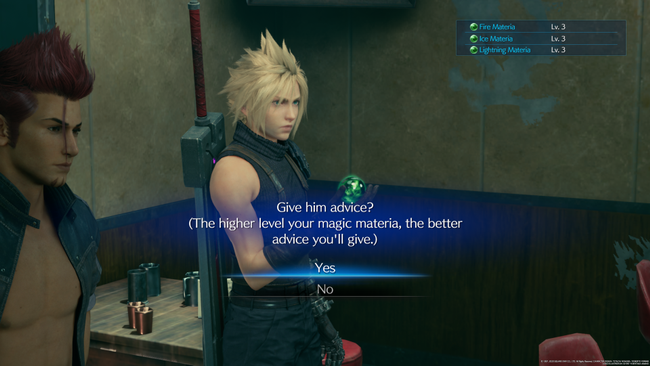 Your next stop will be at the counter-service restaurant near the heart of town. Again you’ll have different outcomes depending on the level of your Fire, Ice, or Lightning materia, and you’ll be able to choose a suggestion based on which one happens to be the highest level. Again, if you pick one with a Level 3 materia (such as “Stove” if your Fire materia is level 3), you’ll earn another Moogle Medal. 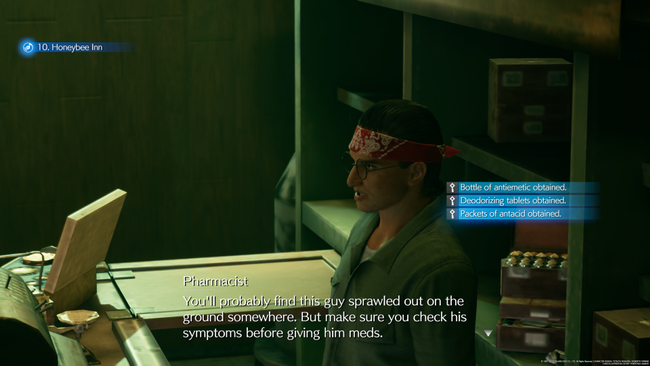 The last part of the quest will depend on the level of your Cleansing materia. If you happen to have a Level 3 Cleansing, you’ll earn some key items all throwbacks to the original game: Bottle of Antiemetic, Deodorizing Tablets, and Packets of Antacid. If your materia is a lower level, you’ll only earn the first one or two items from the pharmacist. Your goal is to go around town with the medicine, and return once you’ve delivered at least one.

Once you get the VIP Card key item from the pharmacist, you’ll just have to follow a few more quest markers to eventually get a Turbo Ether for finishing the quest and enjoying a nice nostalgic revisiting of some of the events from Final Fantasy VII.

At this point you return to Madam M after finishing up remaining quests, and after a few cutscenes and heading to Corneo’s mansion, you’ll be able to see which dress you’ve obtained for Aerith. Following a dance sequence at the Honeybee Inn, you’ll get your final dress for Cloud.