Monster Hunter Stories 2 will let you customize the Protagonist

You will take the role of the Protagonist, who is a descendant of Red, a legendary Monster Rider famously known for his Rathalos Monstie called Ratha. You can input your own name for the protagonist—and even the looks as well! Monster Hunter Stories 2 will let you customize the protagonist avatar; from hairstyle and face shapes to colors for the hair, eyes, and skin. 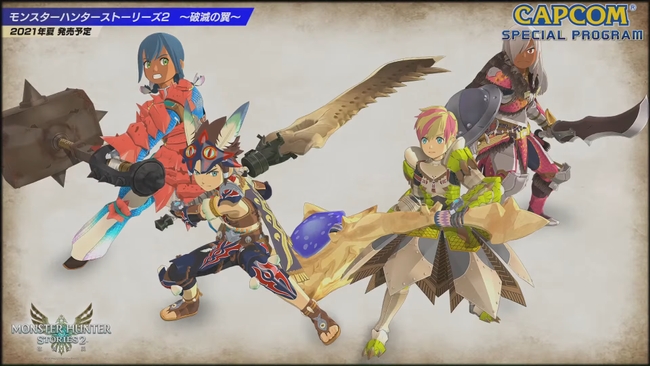 Other than Red and the Protagonist, Monster Hunter Stories 2 will also have a cast of characters from various races, such as the Wyverian girl Ena who will play a key role in the story. Ryozo Tsujimoto also teased that the RPG will have more monsters from the Monster Hunter series other than Tigrex, Legiana, and Anjanath that have appeared in the reveal trailer so far.

Monster Hunter Stories 2: Wings of Ruin will be available for Nintendo Switch in Summer 2021. More details on this sequel to the RPG spin-off will be revealed along with Monster Hunter Rise at Capcom's own TGS 2020 stream on September 27 at 21:50 JST (13:50 BST, 05:30 PDT). The English version of the stream will be hosted at the Capcom USA channel on Twitch.