While some of the screenshots show event dialogues on how the protagonist's team will encounter romance candidates for the first time, the other screenshots revealed more details on the gameplay features, such as weapon customization and the DG Gauge.

In addition to HP and SP gauges, the action segment of Maglam Lord will have a DG Gauge that plays an important role in the gameplay. While it can be filled slowly by landing normal attacks, you can fill it faster by launching Devouring Cuts that trigger with charged attacks and combo enders. When the DG Gauge is full, you can press the R stick to switch the player character to the protagonist Killizzark who temporarily regains full power.

In addition to crafting weapons, you can also decorate them to customize not only stats but also looks. Each weapon has a pre-determined amount of decoration slots, but the same weapon with a higher rarity level may have more available slots.

There are four types of decorations available: Attachment, Decal, Color Change, and Total Change. The first type can be attached anywhere on the weapon, while the latter may change the weapon looks to something bizarre like fish or even ice cream.

Find more new screenshots for Maglam Lord right below. The new action RPG will be released on March 18 in Japan. An English localization has yet to be announced. 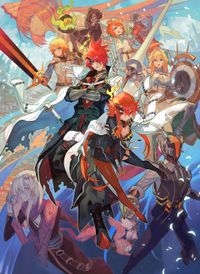