Bandai Namco has today released a new major update for Super Robot Wars T which upgrades the game to version 1.03. It's a major one because rather than just simply fixing bugs and issues, this update expands the game with an even harder difficulty mode along with stat cap increases for allied pilots.

At the same time, a new paid DLC, the Replay Support Pack, has also been added to the DLC lineup. Purchasing this DLC will give the player a tremendous bonus of funds (to upgrade robots), TacP (to enhance pilots and more), and useful items.

You can read more information about the updated content right below. Super Robot Wars T has been released since March 20 in Japan and the rest of Asia for PlayStation 4 and Nintendo Switch. The English localization is also available in Southeast Asia, although the Nintendo Switch release is only available physically due to the lack of Nintendo eShop in the region. 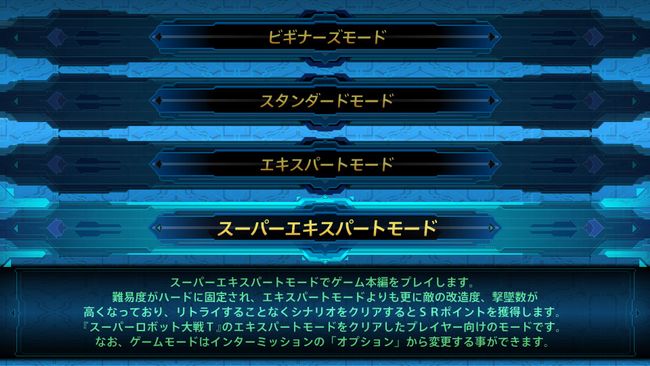 Super Expert Mode
A new mode added in the Game Mode Selection menu which is even more difficult than Expert Mode. Just like the latter, the difficulty level in this mode is fixed to Hard, and clearing a scenario without retrying will allow you to obtain SR Points. However, enemy units have higher upgrade levels and enemy pilots have more shootdown scores than even Expert Mode, so some enemies from the early parts of the game will already have applied Custom Bonuses and Ace Bonuses.

Super Aces
In recent Super Robot Wars games, allied pilots can get promoted to Aces with individual shootdown score of 60, and Great Ace at 80. Getting promoted to an Ace lets them sortie with a +5 morale bonus and have a 1.1x multiplier on receiving funds from shooting down enemies.
This update adds a new Super Ace promotion that applies once a pilot has reached a shootdown score of 300. The above bonuses are amplified further so that Super Aces will get a +10 morale bonus and a 1.3x funds multiplier.

EX Skills
Some of the pilot skills can now be upgraded an additional level to become EX Skills which provide even stronger bonuses. Listed below are examples of such skills.