Bioware is seemingly hard at work on an Anthem overhaul, and other EA studios might be chipping in

Anthem is a sort of elephant-in-the-room for many Bioware fans. Long waiting periods for the next Mass Effect and Dragon Age leave many somewhat hopeful for the future, but the studio's 2019 looter-shooter having released to a lukewarm reception and mired in mundane design decisions and a disappointing loot and gear system left many of us feeling cold. Despite some efforts to rejuvenate the project through this summer's Cataclysm release, a dropped roadmap and ensuing bouts of radio silence has had the future of Anthem appearing murky at best. 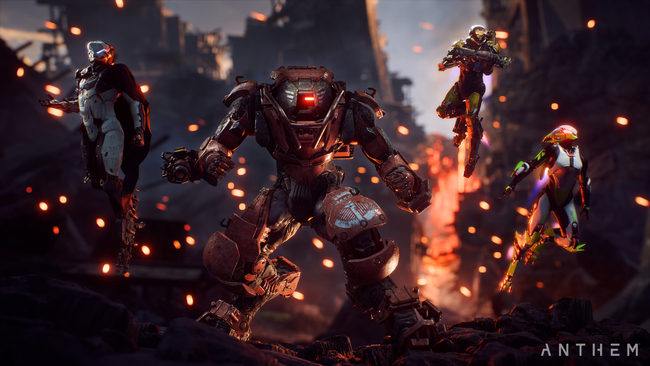 However, reports from both Kotaku and IGN indicated that publisher Electronic Arts is not yet finished in its attempted to revitalize the troubled online shooter. According to Kotaku, people familiar with the overhaul project refer to it internally as "Anthem 2.0" or "Anthem Next." However, a timeline nor a release cadence has been decided on for the planned updates -- the exact format of any future release is still in flux. It could end up being a series of updates released over an extended period of time, or a game-altering packaged release, which could draw comparisons to games like No Man's Sky, Destiny, or as a best-case scenario: Final Fantasy XIV: A Realm Reborn (I am obligated to mention that one.)

While Kotaku reports that numerous Bioware studios in Austin, Alberta, and Edmonton are hard at work on Anthem, IGN also provided a statement declaring that non-Bioware studios from across EA are also chipping in. While EA studios assist in terms of environmental art and other minor roles, Bioware is working on core systems such as mission structure, loot, and world design.

There's no clear confirmation on the scope or timetable for what lies ahead in 2020 for Anthem, but we'd love nothing more than to be pleasantly surprised by whatever is shown next.

Anthem: how to get the Legion of Dawn armor and other pre-order bonus items