A few chapters into Ni no Kuni 2: Revenant Kingdom, you will found your own kingdom called Evermore. Here, you will be tasked to build up your nation and help establish a strong foundation that will ensure your legacy will last for generations to come.

As you can imagine, constructing a full-fledged kingdom from scratch can be nigh-insurmountable of an undertaking if you try and handle everything on your own. Kingdom Management ends up a significant part of Evan's journey in Ni No Kuni 2, and it isn't always easy going.

With a bustling kingdom under your belt, you can turn your attention to other areas of Ni no Kuni II: Revenant Kingdom...

Kingdom Building Guide: The Basics of Managing Your Ni no Kuni 2 Kingdom

Kingdom management begins the moment Evan takes a seat on his throne. From here, he (meaning you) will be able to issue orders to subjects to help his kingdom grow and prosper. This, in turn, will make your journey easier as a result. By building facilities, assigning citizens, and having them carry out research into new technologies and techniques, the game really opens up in multiple ways. That includes shops that offer unique items for sale and equipment stores that sell a variety of weapons and armor.

Right off the bat, you will be able to create a weapons shop (research, craft, and upgrade weapons), a higglery (where higgledies are born and raised), an outfitter (research, make, and improve armor), and a spellworks (research, learn, and boost spells). Pretty soon, you’ll be building even more useful places like one that can give you better rewards in battle. We'll get into that in a moment 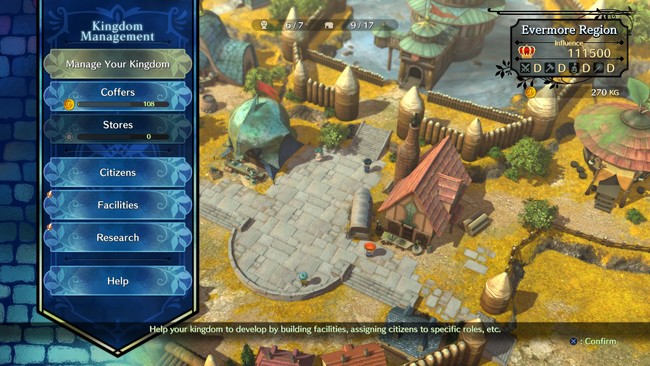 No matter what you are doing, you should always have research being done at any given moment. Even if you are in the middle of a story mission, when you get the chance, drop everything and hurry back. This will make the game so much easier for you especially as you near the end.

All of this is handled through the use of Kingsguilders, a currency that is separate from the normal guilders you will find in your normal adventure. Kingsguilders, or KG, is required to handle every step of the kingdom-building process including constructing new facilities, upgrading them, and carrying out research.

KG will gradually accumulate as citizens go about their routines, and you collect them from going to your coffers on the main Kingdom Management screen. As your influence starts to grow, you will begin to amass an even greater amount of KG at a quicker rate, so it’s important to check back regularly as you build up your kingdom. Thankfully, you can find out how much KG you have through the main menu so you don’t always have to visit your kingdom to find out.

It goes without saying that running a kingdom is more than just doing research. You will also need to rely on farms and mines to gather materials. Just like with the other structures, you will have to assign the right people for the job. As the ruler, you will benefit from taking your share of the harvest, which can be collected from the kingdom’s stores through the Kingdom Management menu. The stores themselves have a limit to the amount they can amass, so you’ll need to empty their reserves normally so the operation can continue to flow.

All of this requires staff with enough IQ and the right amount of KG to fund their projects. The more complex the research, the longer it will take. The higher the IQ of the workers, the shorter the required time will be reduced to. You can even spend more KG to speed up this entire process - almost like it was some weird free-to-play gimmick.

Speaking of which, any and all research will have a time duration attached to it. Some may take as little as a minute while others can take several hours. Every citizen in your kingdom will be different, each with their own personal strengths and weaknesses. These attributes are divided up into four categories: War, Ingenuity, Spritecraft, and Conjury. 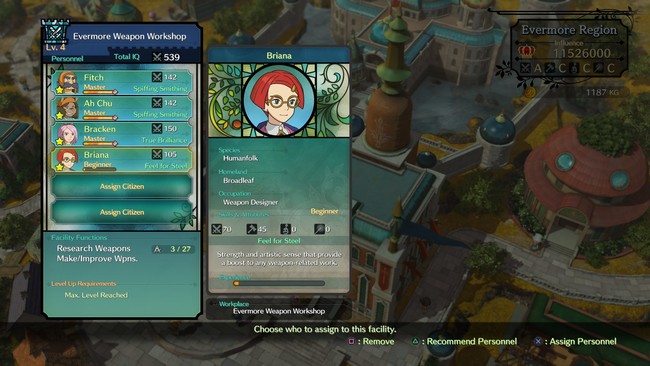 Each person also has their own special skills to provide a range of effects, so it’s vital to assign each person to the position that will make them the most beneficial to your agenda. For example, Tani has Dowser’s Instinct - thanks to her sense of treasure-hunting, this can give a nice boost to the mining camp’s productivity. If you’re not sure who the perfect person is for a facility, the game has a handy Recommend Personnel option to delegate the work on your behalf. During my playthrough, I tend to use this to get certain research done quicker.

Lastly, there’s another aspect the game doesn’t tell you about for some reason, and that is leveling up your personnel. By simply having them assigned to a facility, they gain experience over time and rank up from Beginner to Master.

You will want to make sure you are constantly leveling up those who are able to by visiting the Citizens tab on the Manage Kingdom menu. This will make them more effective at what they do while also improving their IQ, allowing higher level research to be completed. When research isn't being performed, you may want to cycle citizens around to maximize everyone's potential.

The Best Facilities and Research to Focus On For Your Kingdom

First and foremost, the main objective you are working towards is upgrading your castle as soon as the option becomes available. Upgrading your castle benefits the entire kingdom by expanding your property, allowing you to build even more advanced facilities.

To do this, you’ll need to meet a threshold that includes the amount of influence and citizens before the option becomes available. It also costs a lot of KG, but it will certainly be worth it in the end as the amount of money you’ll be making will more than compensate for the expense.

As you work towards upgrading your castle, I would focus on the most beneficial facilities first that are available right away. 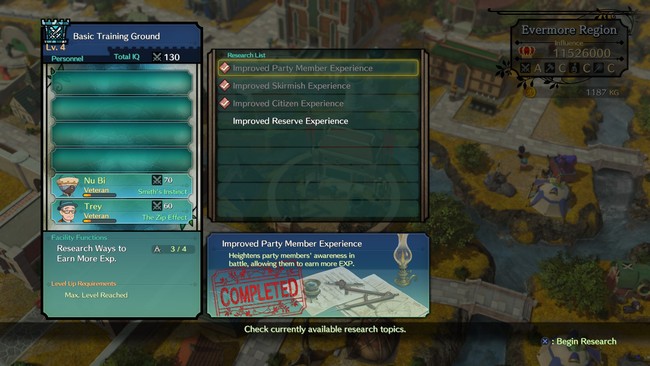 First off is the Explorer’s Guild. This offers a wealth of tangible benefits you will get to use in the game, such as moving faster on the world map and collecting more and better items dropped from enemies.

Another important one is the Spellworks facility. This lets you level up your magic using materials you have gathered during your journey. Evan can learn a revive spell from this facility which will certainly come in handy.

Finally, the Basic Training Ground researches ways to improve the amount of experience you earn in combat. This includes increasing the overall party experience points and sharing the rewards with those who aren't in your immediate party.

Bottom line, I would prioritize these three:

Just like with the others, as you upgrade your castle, you will be able to unlock more advanced versions of the Explorer's Guild and Training Grounds, which is why I would continue to focus on these two. Most of the other facilities are mainly designed to increase influence, deliver more resources, and fill up your coffers. However, there are also ones that help with things like Dreamer's Doors.

I won't spoil what happens, but you will also want to get your Weapons facility to at least Level 4 while getting your Barracks research rolling deep. You'll thank me later!

At any point, you can take control of Evan and run around the kingdom using the facilities for yourself. This is a really nice way of getting any shopping done before a big battle without having to bother with the normal towns.

Over the course of the game, your citizens may also have quests for you to complete which can grant you kingsguilders along with experience points. This is great especially early on when your average KG accumulation rate is low. It's also a nice way to get to know those who serve under you, and who knows? You may get visitors that are interested in joining your kingdom!

That last point leads us to perhaps the most important part - finding personnel out in the wild. First up, you’ll be recruiting the talents of Auntie Martha. After you go visit her, you learn that someone has taken off with her special cauldron that she uses to create higgledies. Her, like almost everyone else you attempt to recruit, will require you to complete a quest before they’ll join your kingdom. This will have you exploring places you normally wouldn’t, such as the Grotty Grotto.

Another way to obtain new citizens is through the Taskmaster. This little dude with a sign can be found in all the major towns and is marked on the map. Almost all of the tasks he has for you are fetch quests. Once you have completed the request, you can turn it in to earn coins. These coins can be swapped for items or, in this case, new citizens to recruit. Whenever a citizen is interested in joining your kingdom through the Taskmaster, all you have to do is talk to them. 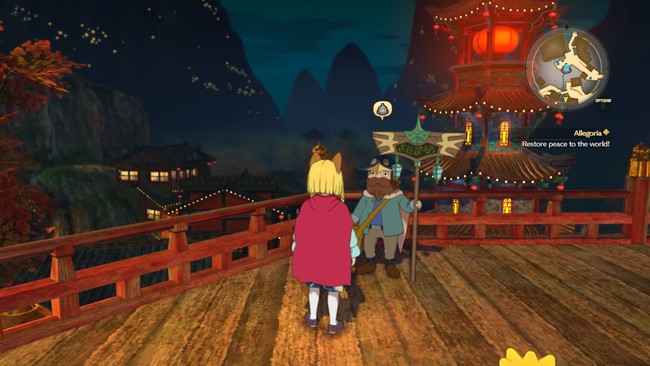 As you progress through the game and complete each kingdom's story mission, more citizens will become available through the Taskmaster. Once this batch runs out, you will also need to focus on completing his quests. If you're ever confused on what you need to do, inside the main menu there is a Quest option - the Taskmaster is conveniently part of his own separate column. By toggling the information about that particular quest, the game will tell you where you can find that particular material or enemy if you encountered it previously.

There are a few citizens that can be found either on the overworld map or by taking on normal side quests. If you check your mini map inside a town, you may find these markers that are little white circles with blue exclamation points. This indicates that particular NPC has a quest available for you, which can sometimes be a chance to obtain a new citizen. Make sure to pick these quests up as you progress through the story as you may be able to complete the objectives through your normal playthrough.

Ni no Kuni II Tactic Tweaker Guide: how to best use the tactics tweaker to get the most out of combat