Ni no Kuni II Tactic Tweaker Guide: how to best use the tactics tweaker to get the most out of combat

Ni no Kuni II: Revenant Kingdom features a wealth of different systems, but as in any good RPG battles and combat are a huge component. Combat unfolds in a real-time action fashion, but you do have a lot of deep control over how things unfold, and that's primarily managed through a very handy little feature called the Tactic Tweaker.

The Tactic Tweaker is best thought of as a fine-tuning system for your battles. It'll allow you adjust various parameters around battles in order to change how they play out.

Settings found inside the Tactics Tweaker can fine-tune many aspects of Ni no Kuni 2's combat, dealing with everything from elemental affinities to status ailments, party abilities and even experience boosts. We'll go over all these in full a little further down this page, in fact. First, however, let's take a look at how to get to and use the Tactics Tweaker for battle fine-tuning.

Once you've set your Tactics Tweaker up the right way, check out more of our Ni no Kuni II: Revenant Kingdom Guides: 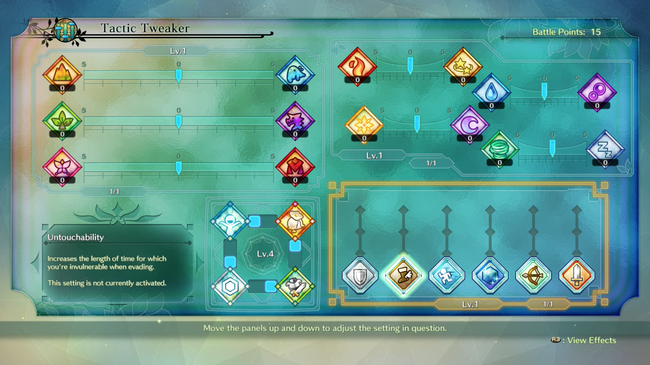 How to use the Tactic Tweaker in Ni no Kuni II

The first thing to note is that you won't have the Tactic Tweaker from the moment you start the game, though it is a feature that'll unlock for you very early on. Once you have access to it, all you need to do is hit Ni no Kuni II's pause menu and head down to the Tactics Tweaker option - duh - and that'll greet you with a much more complicated looking page.

As your party of characters in Ni no Kuni II tackle battles, level up and otherwise progress you'll be rewarded with Battle Points. The different options in the Tactics Tweaker are locked behind Battle Points, so essentially all you'll need to do is keep playing to unlock better Tactic Tweaker settings.

Here's an example - if you put a battle point into leveling up the Elements and Ailments category of Tactics Tweaker bonuses, you'll then be able to put a point towards a damage boost for specific status elements and ailments.

There are four main categories(Monster Affinities, Elements & Ailments, Arts of War and Spoils Settings) but then inside each of these, there are multiple bonuses you can allocate points towards.

Over time these bonuses can be stacked up significantly, making the Tactics Tweaker a key way in which you'll greatly improve your combat abilities.

There are a few different categories in the Tactics Tweaker - four in total, each of which allows you to fine-tune and add buffs to key areas that impact combat.

In most cases, these bonuses come on an either/or scale, with bonuses directly opposed to each other. For example, if you want to boost damage against Nobility-type enemies, you'll need to sacrifice a boost against its opposite, Nature. If you want to protect yourself against the Befuddlement status effect, you'll need to leave yourself vulnerable to the blaze status effect. It's all a question of balance. Others are simple individual bonuses that can be boosted over time without removing other bonuses.

Here are the Tactics Tweaker categories in detail, and where your points can be spent within each:

The Monster Affinities area of the Tactics Tweaker allows you to boost the amount of damage you can deal to monsters, with the damage boosts divided up within this section by enemy type.

The enemy types you can apply bonuses to are:

Remember, you're choosing to boost one or the other of each of these pairs.

The elements & ailments section of the Tactics Tweaker boosts your party's resistance to some elemental damage or status ailments, allowing you to avoid their nasty debilitating effects.

These are either/or choices within the two groups, as indicated by the 'OR' text.

The arts of war section of the Tactics Tweaker offers you the chance to enhance the abilities of your party, boosting the impact of your skills. Unlike the other sections, there are no either/or toggles, but rather are simple individual bonuses you can improve over time.

The spoils area of the Tactics Tweaker gives you the ability to alter drops and rewards gained from battle - allowing you to do things like boost the amount of experience or gold you get.

This one works a little differently, with all of the bonuses connected rather than a selection of either/or choices. You spend points to 'switch' between different options, and the layout means you can point multiple switches towards different areas.

A good example is that if you flick one switch towards EXP Growth you'll get less of a bonus than if you flick two towards it - but by flickign two towards it, you're obviously missing out on other bonuses. Each of the four areas has two potential bonuses: 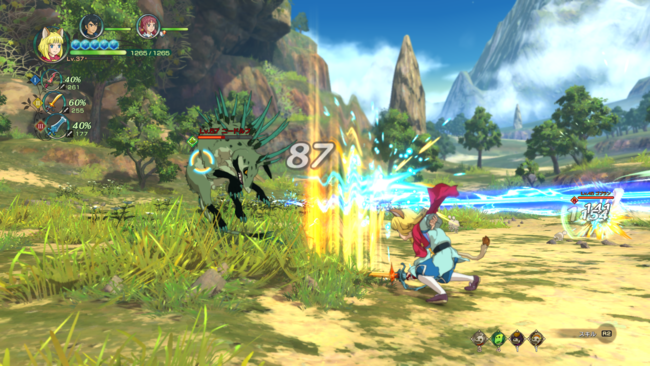 Ni no Kuni II is a pretty easy game, to be honest, but if you want you can still use the Tactics Tweaker to fine tune things to make your progress through the game a little smoother.

There's a few things we'd recommend for this based on the explanations we offer on the Tactics Tweaker above - a few areas where you should focus to maximize character growth.

First off, we'd generally recommend hitting the Spoils Settings first. Use this to boost your EXP gains through the Growth & Refinement bonuses.

The Finery & Kit bonuses are incredibly useful early on, too, as they'll give you a higher chance for getting really high quality gear as loot from battle. This is a better idea than going for the money bonuses early on, as the extra gear gained will save you a lot of money in itself.

Second up, focus on the Arts of War. This category has no drawbacks since every point spent results in a raw buff. Brutality (Damage Boost) and Dynamism (MP recovery boost) are the most useful ones to grab first, but every item on this tree is particularly useful.

Elements and Ailments and Monster Affinities are the less immediately useful categories, but both can have a big impact over time - but focus on these later on after finishing up your Spoils and Arts of War Tactics Tweaker settings.

What settings have you picked for the Tactics Tweaker? Let us know in the comments below!