Final Fantasy VII Remake has been a long time coming. Fans have been waiting for this release for decades, it feels like - and so it’s no surprise that there are a lot of frequently asked questions out there.

While we totally recommend you check out our FF7 Remake review and peruse our full FF7 Remake guide, on this page we thought we’d answer some common questions that we’ve seen asked about the game.

Below we cover a range of topics including the game download and install size, the level cap, postgame and new game+ options, the deal with missable items and respecs, how to switch voiceover language and more. If you have a burning question we don't cover, pop it in the comments - we'll endeavor to answer it or even to add it to the main article.

There are no story spoilers in this article, but if you're sensitive about mechanics of things like New Game Plus, be careful which headings you read. 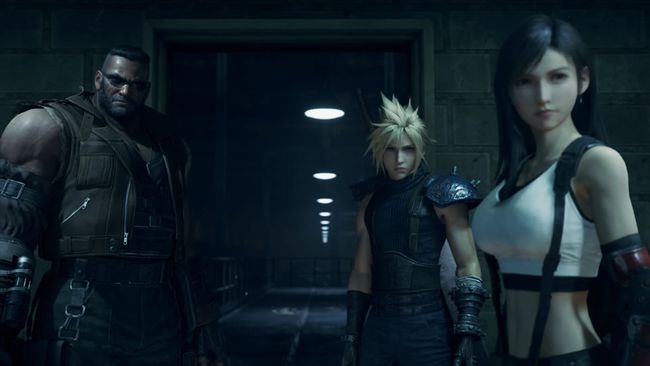 How large is the game download and install? Is there a day-one patch?

We've seen the game size reported as around 91gb, and the back of the box says 100gb is required at a minimum. The total file size of FF7 Remake was 85.8 gigabytes once installed for us, however. That doesn't include any patches or updates, and as of writing (April 6) there has not been a patch issued. When the game installs, it will make Chapter 1 available to you first - around an hour’s worth of content. Chapter 2 won’t be available until the game is fully installed, however - it’ll boot you back to the main menu until it’s installed.

How does saving work - can you save anywhere?

FF7 Remake has a pretty standard auto-save functionality that is triggered pretty much any time you do something significant like finish a battle, turn in a quest, or complete a chapter. In addition to this, you can manually save any time you like by simply opening the main menu of the game and pressing triangle. You can create multiple saves if you want to try out different story branches or such.

It’s worth noting that the auto-save and retry functionality are very generous too, even on hard - if you die, the game will allow you to load in right before the fight that killed you, but just outside of enemy aggro range or the boss cutscene trigger so you have a chance to change your equipment. One late-game cutscene leads directly into a boss, and an on-screen prompt will give you a chance to open the menu at the end of that cutscene.

How long does it take to beat FF7 Remake? How much of the PS1 original’s story does it cover?

RPG Site writers playing FF7 Remake pre-release found that the game took between 30 and 35 hours to complete on the first run. This run involved tackling every single named side quest, but didn’t necessarily involve all the optional arena battles, many of which you can't undertake until after seeing the credits.

In terms of the original story, for those familiar with the original FF7, this game’s story is an expanded version of the chapter that takes place in the city of Midgar. It runs from the opening to the moment the characters leave Midgar for the first time. It features lots of changes and additions, however, which is why this section of the story (around 5 or 6 hours in the original) is now over thirty hours long.

What are the playable characters? Is Red XIII playable?

Fans of the original FF7 will of course know from the answer above that this section of the game features Cloud, Barret, Tifa, Aerith and Red XIII. Party members introduced later in the original like Cid, Yuffie and Vincent do not appear.

Cloud, Barret, Tifa and Aerith are all fully playable characters. Red XIII joins your party and fights alongside you, but only as a ‘guest’ party member - you cannot control him, command him or change his equipment.

While greatly expanded as characters, the Avalanche crew of Biggs, Wedge and Jessie are also not playable characters.

Are other languages included, and how do you switch language?

The good news is that FF7 Remake includes multiple languages for you to enjoy, without any DLC required - it’s all part of the initial install from your digital or disc purchase.

Your language setting isn’t based on your system language, either, despite this being the case for the FF7 Remake demo. In the final game, simply head to the System menu, then Options, then Language. This menu will give you the choice between Japanese, English, French and German for the voice over.

Are there Missables in the game? Are there Points of No Return?

Final Fantasy VII Remake is structured in an interesting way in that most chapters of the game are linear, taking you from point A to B to C in order, but every few chapters you will be placed in an open-ended hub with side quests and more ability to decide what you want to do.

However, this means that you must eventually move on from these hubs. Chapter 3 takes place in a unique hub with several side quests, but once you begin chapter 4, you will not come back to this hub again. The linear chapters also generally have many locations that cannot be revisited.

This means that, yes, there are missables in the game, at least on your first play-through. If you miss a piece of materia or a weapon or armor drop in a chest or walk past a vending machine without buying its music disc, you may not be able to go back - but it may show up in a shop later instead.

The good news is that once you have completed the game, you unlock a chapter select and can use this to go back to pick up anything missed - so there are no permanent missables. If you’re still concerned about this, use some of our guides for weapons, materia, enemy skills, limit breaks and the like to make sure you don’t leave anything behind. This goes for a lot of quest rewards, too - so for instance if you miss the chance to option the Corneo locked doors in chapter 14, you'll not be able to open them before the endgame.

If you’re worried about points of no return, keep in mind that Chapter 3, Chapter 8, Chapter 9 and Chapter 14 are your ‘open-world’ chapters; once you leave these chapters, you lose access to their hubs and quests. The game will warn you as such. All linear chapters are, of course, a one-shot deal.

What is the Level Cap in FF7 Remake?

FF7 Remake has all of the iconic Final Fantasy skills you’d expect, from the basic like Cure through to Curaga and advanced Summon Materia like Bahamut. In this sense it is different from the Midgar chapter of the original game.

Despite this, the level cap is level 50. On an average playthrough you will probably be between level 30 and 40, which will leave some levels to mop up afterwards. Though character levels stop growing at 50, there’s still some character growth wriggle room through leveling up Materia to unlock new spells and picking up manuscripts to earn more weapon upgrade SP.

What is the postgame like? Is there New Game+? How does Hard Mode work?

Once you finish Final Fantasy VII Remake, there will be a variety of postgame options open to you after the credits roll. Here’s what you need to know…

Is there a secret ending?

We don't think so, though you can never be sure. In the review process, we achieved a full Platinum Trophy in FF7 Remake which involved getting all weapons, completing all side quests, finishing the game on hard, and finishing all of the optional endgame arena battles. We also fully completed the Play Log, an in-game menu that tracks other achievements, such as viewing every possible cutscene outcome in Chapter 14. After completing the game again on Hard mode with these under our belt; the ending did not change. However, it's worth noting that Kingdom Hearts III added its secret ending via a patch around a week after launch - so one could be coming, potentially.

Can you respec or reset your characters in FF7 Remake?

Short of starting a new game on normal, as far as we can tell there is no way to fully reset any FF7 Remake stats - be that materia or character levels. With materia you could, of course, buy or re-obtain level 1 materia if you want to grow it again, but beyond that the only respec option is that Chadley will allow you to reset any spent SP on weapon upgrades for a little bit of gil, which in the postgame is very plentiful indeed, if you ever decide that you want to retool how you've spent your points on any specific weapon.

Well. Yes. Read our review for our full, complicated verdict on the game.