We take a look at Final Fantasy IV before it's UK release - could it be the best remake ever?

Tetracast - Episode 162: In A Simulation

A hodgepodge of topics this week, ranging from Final Fantasy IV to Doom Eternal to Ys Origin.

Based on the DS version of the game

Square-Enix's big RPG release on the DS falls short in the UK charts.

After the GBA remake of FF4, Square-Enix have surprised fans by announcing a 3D DS remake of Final Fantasy IV. 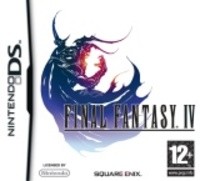